Since June 2020 Concern has been conducting research in Malawi, Somalia, Sierra Leone and Bangladesh to track the impact of the Covid-19 pandemic and the national level responses on some of the world's poorest people. We have interviewed households, mainly by phone, to understand what affect the pandemic is having on people's health, livelihoods, and coping strategies. Households have been interviewed four times, in late June, mid July, early August and early September, allowing a picture to emerge of how their situation is changing over time. 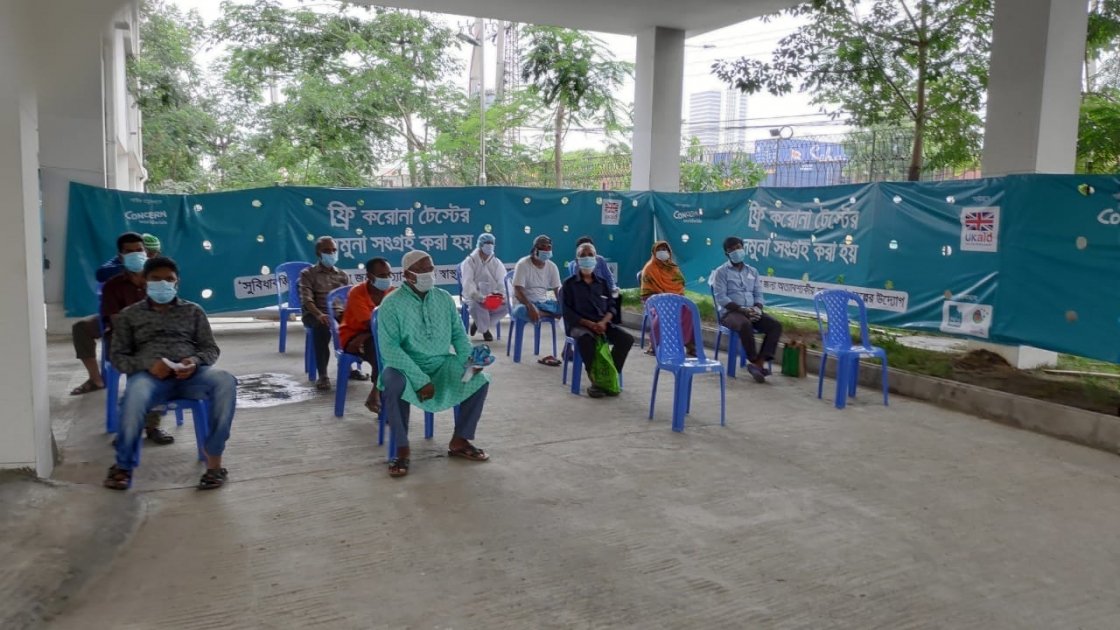 Waiting area at Digital Booth - Concern Bangladesh in collaboration with local partners, have launched New Digital Booths in Dhaka, for screening and testing of Covid-19. Following a digital consultation with a doctor, patients showing symptoms are guided to a booth where samples are taken to test for Covid-19. The service is free and available daily, except Fridays. Patients will receive results within 48 hours, additional advice and preventative supplies such as masks, if required. Photo: EHD / Concern Worldwide

The reports also outline what Concern is doing in each context to respond to the situation and mitigate the negative affects on the people affected by it.

Government responses were swift in each country, but in many instances have exacerbated underlying challenges, with poverty levels expected to rise in the longer term, and access to essential services, such as health and education restricted in the medium-term. Our research shows that people have a solid understanding of Covid-19 and the guidelines they should follow to protect themselves. However, often they are not in a position to follow these recommendations.

Early on, we observed high levels of fear amongst respondents, and while this still lingers, increasingly it is being replaced with a sense of apathy as people begin to feel the messaging does not apply to them and they return to the struggles of their daily lives. Restrictions introduced on travel means that the price of food has increased, in urban areas in particular this is leading to changes in the quantity and quality of food the poorest are able to consume, with the potential to affect children’s nutritional status over time.

People have also been affected by changes in how they earn their livelihoods, those dependent on small scale businesses have noticed a sharp decline in the number of customers paired with an increase in the number of requests to have goods on credit, others who rely on casual labour highlight how this is increasingly hard to find. Children in particular have been affected by the lockdown and the closure of schools, with the poorest not able to access online or radio based education initiatives.

On a more positive note, our interviews also show that early and well-targeted interventions can help to alleviate some of these challenges.

Impact of Covid-19 on the Poorest: Research Paper 1: Volume 1 Overview of Findings|PDF(928 KB) 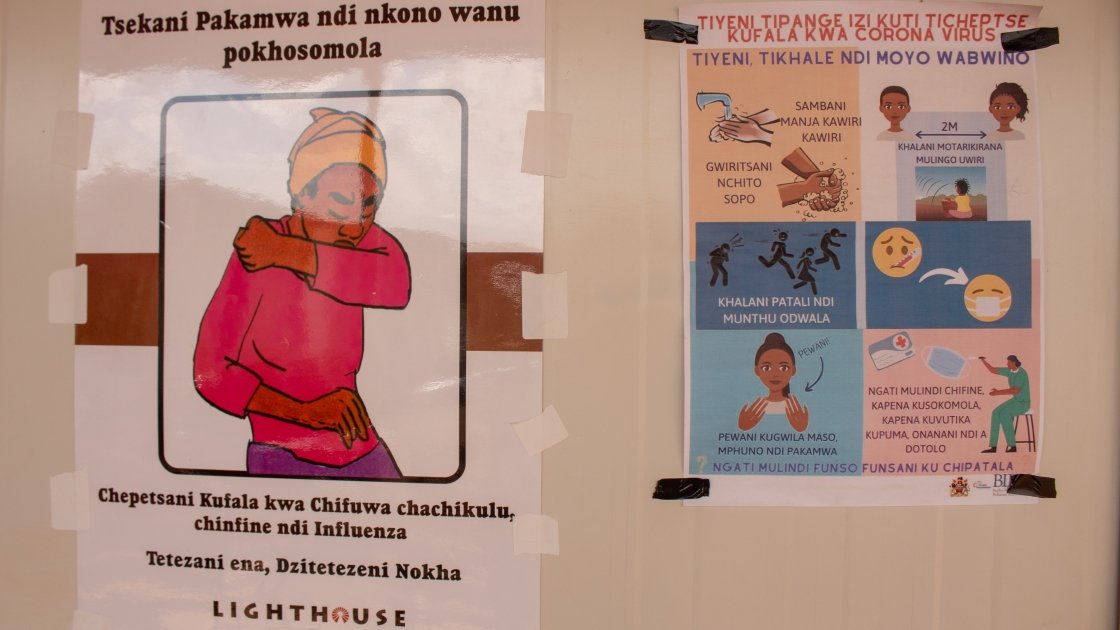 In response to the threat posed by the Covid-19 pandemic, the Government of Malawi declared a State of National Disaster on 20th March 2020 and launched a National Covid-19 Preparedness and Response Plan on the 8th April, several days after the first cases were confirmed in the country. Early prevention responses from the government included the suspension of all formal meetings, gatherings and conferences, with the president announcing a 21-day lockdown starting Saturday 18 April, that was subsequently reversed to allow for more consultation to prevent harm to the poorest and most vulnerable of society.

At the beginning of May, the Government of Malawi, UN agencies and leading INGOs launched an Emergency Appeal that coordinated organisations’ immediate response to Covid-19, supporting the Government’s preparedness and response efforts through targeting 6.7 million people.

A global pandemic unfolds in different ways in different countries, and while immediate health impacts remain the primary focus of attention in many countries, the secondary impacts on food security, livelihoods, access to basic health services and the longer-term impacts on children’s education and development are increasingly receiving attention.

In this brief, we look at how the response in Malawi has affected some of the poorest households under each of these areas in three geographic locations where Concern Worldwide works.

In Bangladesh, the first three known cases of Covid-19 were reported on 8 March 2020. On 22 March, a 10-day shutdown effective from the 26th of the month was declared. Subsequently the government asked the army to enforce social distancing strictly, with teams of soldiers deployed across the country, leaving the streets empty in the capital Dhaka and most roadside shops closed.

Bangladesh exemplifies the triple blow that many countries have suffered from Covid-19:

In this brief, we report on the experiences of a number of people in Dhaka and Chattogram on the impact of the pandemic and the subsequent response. All are currently included on Concern Worldwide’s Improving the Lives of the Urban Extreme Poor (ILUEP) livelihood programme which is funded by Irish Aid.

By 21 August, there were 1,969 confirmed cases of Covid-19 in Sierra Leone and 69 deaths, however there is a sense these figures may underestimate the scale of the pandemic.

The Sierra Leone Government has implemented what is generally perceived as a well-organised national response. Schools were officially closed on 31 March, and other actions included a series of short three-day lockdowns since early April, limitations on inter-district travel (subsequently lifted), a curfew (currently in place from 11 in the evening to six in the morning), and the compulsory wearing of facemasks since 1 June. On 10 July, as part of a partial lifting of restrictions, the president announced that places of worship could reopen and from 13 July, that air travel could resume. Exam classes returned to school on 1 July for four weeks, and schools in general will re-open on 5th October 2020.

However, the pandemic is considered to be compounding an economic situation already severely affected by currency depreciation and rampant inflation, with a drop in external and internal demand curtailing economic activity, and containment measures disrupting domestic supply chains and leading to bottlenecks in the transportation of agricultural products. Prices of major food commodities have risen well above their long-term average, and a potential reduction in domestic agricultural production, given a below-average rainfall forecast, in the coming season could lead to further food price increases.

In this Brief, we examine how the response to Covid-19 in Sierra Leone has affected some of the poorest households in terms of their food security, livelihoods, access to basic health services and the longer-term impacts on children’s education in locations where Concern Worldwide works. 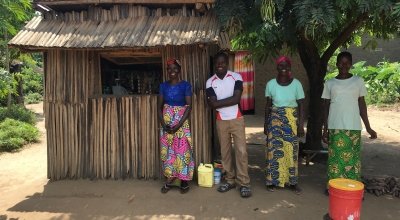 Research from the Graduation Model

This page outlines the research and learning of Concern's Graduation approach in a number of countries since 2008 (Bangladesh, Burundi, Democratic Republic of Congo, Ethiopia, Haiti, Malawi, Rwanda, Somalia, Zambia), as a means of sustainably addressing extreme poverty at the household level. 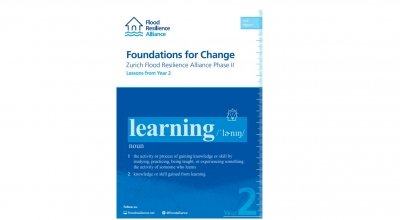 Foundations for change: Lessons from Year 2 of the Zurich Flood Resilience Alliance project 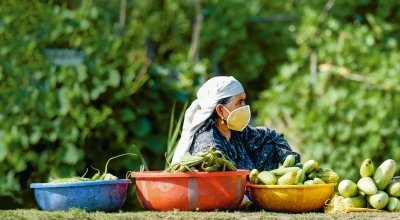