A new multi-year funding programme is allowing Concern to respond to two distinct crises in Ethiopia. Drought and displacement are affecting millions of people in Somali Region and Amhara respectively. At the same time Concern is helping local communities and health services prepare for future emergencies.

The day starts early for Halima and her children Anas and Salma with a call to prayer broadcast at dawn on a tannoy system in the town. In the morning, Halima makes flat bread for breakfast. Her husband is away for extended periods of time, so Halima prepares her children’s meals. For lunch and dinner they have either rice or pasta with vegetables.

Earlier this year Salma began to show worrying symptoms. "She had diarrhoea, vomiting and fever. She had these symptoms for two weeks and her weight decreased dramatically." Salma was experiencing severe weight loss, or wasting, due to not receiving enough food. As a result, she became more prone to other infections. 9.9% of children under five in Ethiopia suffer from this condition. Halima knew she had to do something and decided to seek treatment for Salma.

After a screening, Halima was given nutritional supplements and antibiotics to take home. Concern staff came to check in regularly, and after a week Salma’s condition improved. She began to gain weight and her symptoms diminished. If she hadn’t received this treatment, her condition would have been even more serious.

Concern places communities at the centre of its malnutrition responses. Parents are empowered to recognise the symptoms of malnutrition themselves. "We were told that if a child gets ill or if there is a loss of appetite we should bring them to the health centre" Halima says. She meets with a mother-to-mother support group four times a month. It was here that she learned to spot certain symptoms and heard that treatment was available a short walk away. "The trust in the health centre wasn’t strong" says Dr Mohamed Tahir. "But attitudes have changed." 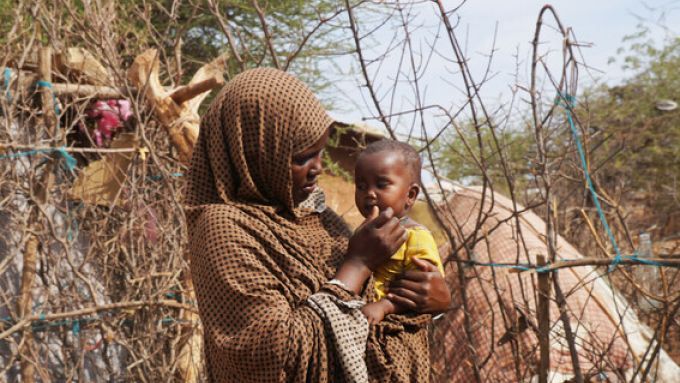 The impact of ERNE

Ensuring mothers have access to quality healthcare for their children without having to travel long distances is crucial. The Enhanced Responses to Nutrition Emergencies (ERNE) is a 3 year programme funded by the EU which seeks to reduce malnutrition in children under five. At the core of the programme is Concern’s community based approach which enables families care for malnourished children at home. The programme is also the first to be given multi-year funding from the EU.

With this flexible funding, Concern helps to increase access to care at local health centres in remote areas like Legahida. As of January this year, the programme had reached 497,582 people and supported 254 health facilities. Halima is one of these beneficiaries

Since the programme came to Legahida in June 2020 Mohamed has noticed an improvement. He and his staff are better able to support the community based treatment for malnutrition at the programme’s core. They are more prepared for increased demand. "In this area, people move from one area to another. There is a time when the patient load will increase, and a time when it will decrease. There will also be an increase in certain diseases at these times."

The CMAM surge approach looks to strengthen by tracking annual rates of malnutrition and preparing responses. After training sessions Mohamed and other staff began gathering data and preparing actions such as increasing staffing and ordering specific medication. The walls of the local health centre are covered in charts on which they plot their findings. "CMAM surge has been the main factor in providing good service." says Mohamed.

An isolated area prone to food shortages, Legahida is feeling the effects of an extreme drought. The Ter Shet river which, when full, separates one side of the town from the other, has run almost completely dry. Bordering Legahida to the South is Salahad where three failed rainy seasons have had an even graver impact. The Concern offices in Legahida and Salahad are just 45 kilometres apart but the journey takes two hours to drive. The bones of perished animals litter the trail on the way into the main town.

Amal lives in Salahad with her six children. She and her husband have no livestock and struggle to find work with local pastoralists. Even in normal times, Amal relies on food aid to feed her family. The prolonged drought has led to food shortages in the area and Amal and her family’s situation deteriorated. She went from being able to prepare three meals a day to just two.

"Due to a lack of milk, to the shortage of food, they became weak" she says. Ultimately Nimo, Jnale and Nahwo needed treatment for malnutrition. They began to recover after taking nutritional supplements. However, as the drought continued so did Amal’s struggle to feed her family. "We had dried food which was not nutritious. We had only wheat to make Injera, nothing else."

Using the same principles that Mohamed and other staff now use to track health crises, Concern staff monitor threats such as drought. Once certain indicators, such as rainfall or the price of food, reach a threshold, they take implement a response. Concern were able to secure a service provider for a physical cash transfer just fifty kilometres away Salahad. This arrangement ensuring a fast response in an area with no access to financial services.

Since Concern carried out an EU-funded cash transfer in Salahad, Amal’s situation has changed. "Thanks to the cash transfer I can afford more nutritious food for my family." She has even been able to buy tomatoes and potatoes which she was previously unable to afford. 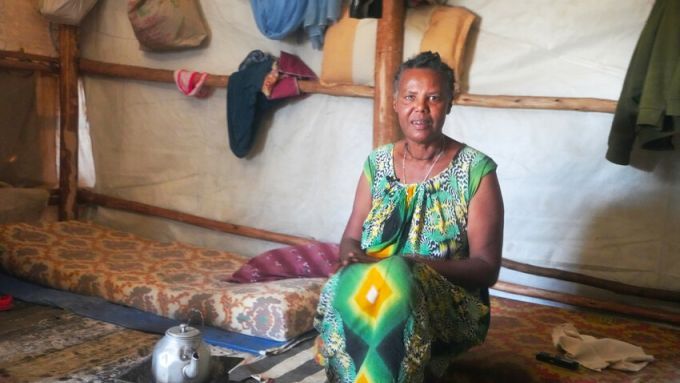 Hunger in Ethiopia: Living Through Crises

Cash transfer is a flexible response which Concern’s country team has been able to implement across the country. In 2021, 2.1 million people were displaced by conflict in Tigray, with many arriving in Amhara. In Gondar, a site for internally displaced people in Kebere Mido was established a year ago. It is currently home to 3,250 people. Concern has also been able to distribute cash to vulnerable households in Amhara.

Workia ran a market stall selling snacks, soft drinks and tea before leaving Tigray Region. She also suffers from HIV and eye problems. When arriving in Kebere Mido, she was unable to open a new bank account as she had no identification.

Workia is one 56,000 people Concern has been able to reach through a cash transfer covering seven sites for internally displaced people in Amhara. "The cash support has been very important to me. My treatment for HIV is very painful so I used the money to buy food suitable to my treatment" she says. "The cash support allows me the freedom to buy what I need."