Accountability is at the very core of everything we do in Concern – at all levels, across our 25 countries of operation. This is why, in October 2017, we became the first Irish organisation to be certified against the Core Humanitarian Standard on Quality and Accountability (CHS).

What is the Core Humanitarian Standard?

The CHS is an internationally recognised standard which outlines nine commitments that organisations and individuals involved in humanitarian response can use to improve the quality and effectiveness of the assistance they provide.

Those commitments are as follows: 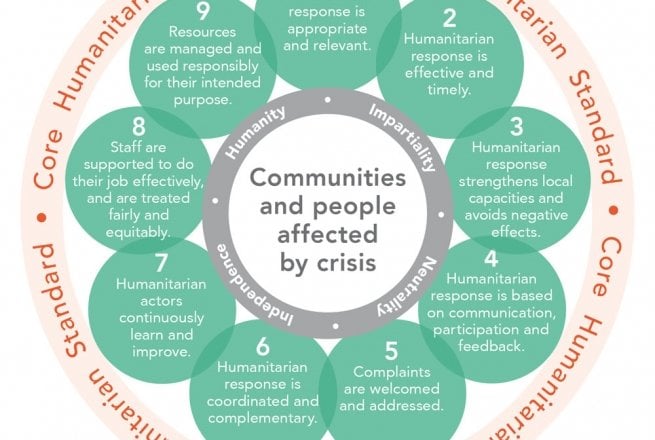 Concern is committed to upholding each of the nine commitments in the Core Humanitarian Standard.

As a member of the Core Humanitarian Standard on Quality and Accountability (CHS) Alliance, Concern continuously strengthens and expands systems and processes to ensure accountability across its development and humanitarian programmes. In late 2017, Concern was the first Irish agency to be accredited with CHS certification based on a rigorous external process including country visits to Liberia and Burundi. This audit process was conducted by the Geneva-based Humanitarian Quality Assurance Initiative (HQAI) The HQAI certificate is valid for four years, during which Concern underwent annual audits – a maintenance audit in 2018 and 2020 and a mid-term Audit in 2019 – to confirm Concern’s ongoing compliance with the CHS.

"Everywhere I go in Concern - whether it’s a refugee camp, whether it is an internally displaced camp or whether it is a remote village on top of a mountain – I know there will be a mechanism so that the community can either make a phone call or put something in a suggestion box and it will be acted upon."
Dominic MacSorley, Concern CEO

In 2022, Concern went through a rigorous recertification audit.  This involved a visit by an HQAI team to Concern Turkey and a remote visit to Concern Sierra Leone, during which 50 staff and partner staff were interviewed along with 149 community participants and documents reviewed.  In addition, documents were reviewed for Concern Chad, Concern DRC and Concern Malawi.  The recertification audit again confirmed Concern’s ongoing compliance with the CHS and also found that actions had been taken to effectively address the four areas (non-conformities) that required attention from previous audits.  Two new areas for attention were identified by the auditors which Concern will now work on.

A CHS Steering Committee at the Concern HQ level provides oversight and technical advice on the ongoing rollout of, and adherence to the CHS. Specific working groups have been established and these work on the non-conformities identified by HQAI. Concern has such working groups on ‘Unintended Consequences’ and also one on ‘Complaints Response Mechanisms’.

Each Country Programme has a CHS accountability improvement plan and they report against this each year.

Details of Concern's HQAI audits (Initial audit, maintenance audit, and mid-term audit) can be found in the below reports.

How money is spent

Over 90% of your donation goes directly toward our relief and development work.
Info
6 March 2019

Our codes and policies shape our work and ensure we stay true to our values.
Info
11 April 2019

Formal complaints can be made either directly from the complainant or via someone acting on their behalf.

How money is spent

Over 90% of your donation goes directly toward our relief and development work.
Info
6 March 2019

Our codes and policies shape our work and ensure we stay true to our values.
Info
11 April 2019

Formal complaints can be made either directly from the complainant or via someone acting on their behalf.