As 2019 draws to a close, the Concern Worldwide team reflect on some of their most memorable moments from the year gone by...

Concern's work spreads all over the world - from our gender equality programmes in Sierra Leone to building resilience in the Democratic People's Republic of Korea. Our staff work in 25 countries across the globe, responding to emergencies in fragile contexts, helping communities to face the challenges of climate change and working towards ending extreme poverty - whatever it takes.

Here, the Concern communications team looks back at some of the stand-out moments from a very busy year...

'As a mother, I could really relate to Amal'

In November, I was fortunate enough to travel to Iraq, a country very few Irish people have had the opportunity to visit. I was there to meet with the communities that Concern and our donors support. I arrived into dusty and dry Erbil in Kurdistan around 4am and the next day, I travelled for about an hour and half to Barderash refugee camp, home to about 14,000 Syrians.

I spent the morning with Hassan, Amal and their two children, Amez (7) and Hevi (3). Hassan had been working with Concern as a professional driver when bombing and shells hit his town in northern Syria. He and Amal made the tough decision to flee over the border into Iraq. Amal is in this picture with her youngest son, Hevi. I asked Amal what the journey was like for her.

She told me how difficult it was especially because Hevi had been unwell with gastric pain throughout the journey.

It is clear from Amal’s face that she is a very strong and resilient woman. 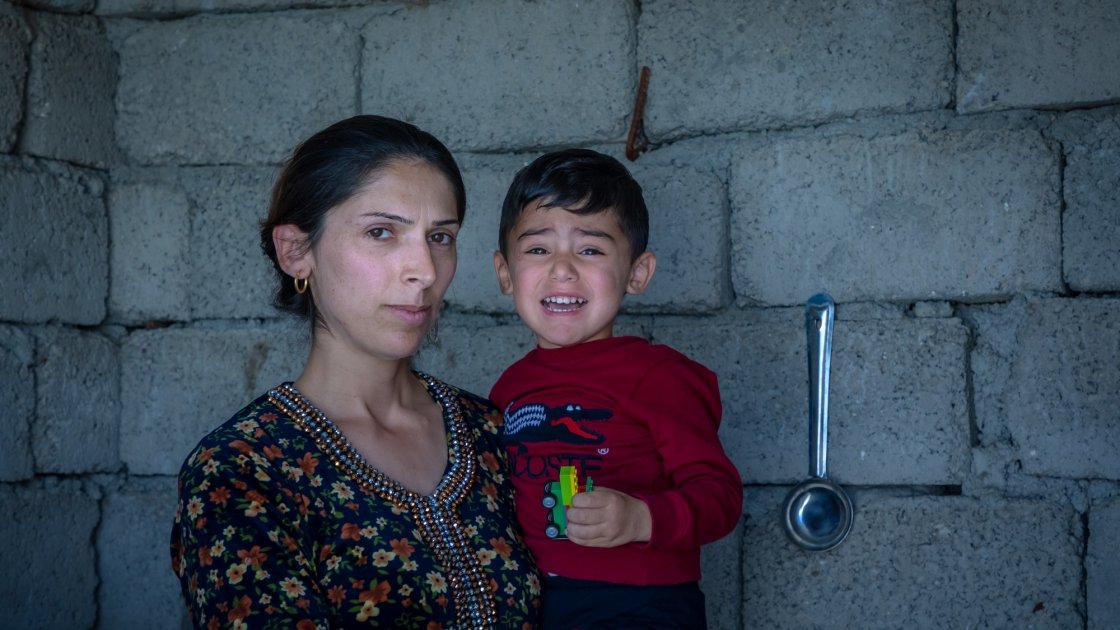 As a mother myself to two young children, I could really relate to Amal and how difficult things must be for her. Mothers everywhere, but especially mothers in conflict regions, need to maintain their calm when all around them its chaos. They have to be there for their children, no matter what.

Amal, Hassan and their two boys had to travel by donkey and horse across the border into Iraq. Amal described how Hevi was crying out in pain during the night as they travelled. Although she was terrified herself that they would have to turn back, she comforted Hevi and tended to his every need.

She felt huge relief when they got over the border and when they eventually got to Barderash camp. In the camp, they are living in a one-room tent that serves as their living room and bedroom.

At the back of the tent, there is a very basic kitchen area with a single tap where Amal can wash dishes and prepare meals. My home in Dublin is a world away from this. I count myself and my children very lucky to have a roof over our heads, clean water and food.

On behalf of Amal and all of our beneficiaries, I would like to say thanks to the generous Irish public for their ongoing support.

'Stawa is one of the most impressive people I've met'

Stawa James, whom I met in Chituke village in Malawi in February, is one of the most impressive people I met in 2019. Her story is incredible, not just in terms of what she has achieved for her family, but the distance she has come herself.

Recounting her desperately poor childhood, Stawa said she "wondered if I was really a child – we went around without any clothes on. Later, the clothes we had were given to us by neighbours."

It was normal for her as a child to go to bed at night without having eaten during the day but life for Stawa, whose children range in age between 18 months and 21 years old, has been transformed in recent years by programmes provided by Concern, and her own drive and ability to grab opportunities and make the most of them. 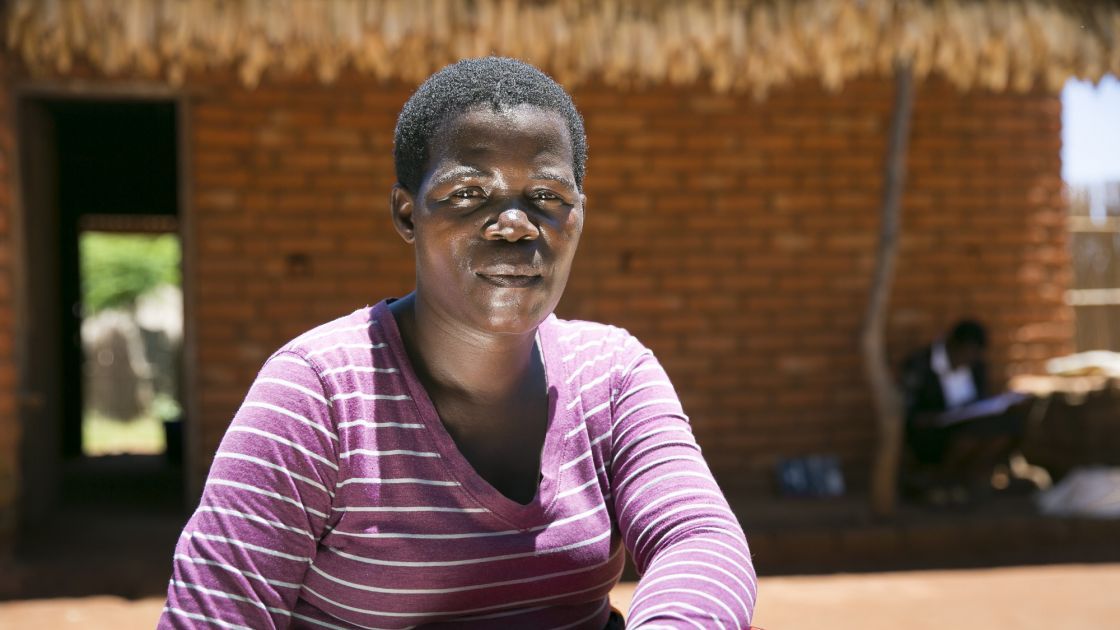 Stawa James at her new home in the village of Chituke in Malawi. Photo: Kieran McConville/Concern Worldwide

She learned the skills needed to launch her own business through Concern’s Graduation Programme before starting up her own doughnut business and selling fruit and vegetables. Her husband, Robert, is catching fish in the local lake and selling them in the nearby town.

By using our Conservation Agriculture techniques, Stawa is producing up to 15 bags of maize from her small plot - which previously produced just one or two bags. In addition, she has used the grant she received as part of the Graduation Programme to buy iron sheets to roof her home.

“The difference between my life and the life my children now have is that we now eat three times a day and the children go to school. I want them to continue to go to school and to go to college so that they can be independent.”
Stawa James

Three weeks after we visited Stawa, Cyclone Idai tore through Malawi, destroying the maize crop that was about to be harvested, killing livestock, flattening houses and leaving thousands homeless.

Stawa’s village, thankfully, avoided the worst of the cyclone but many other communities were not so fortunate. Concern’s team responded rapidly, bringing emergency assistance to those in need and working with local farmers to begin replanting and restocking once the floodwaters receded.

'What really shines through is her incredible strength'

This photo of Atiir says so much about her that I could never fully articulate.

If you look closely you can see how slight she is. Small in stature, with a thin frame. When we met, back in July, she did not have enough food to eat. Her home county of Turkana in northern Kenya suffered through two failed rainy seasons and the resulting drought killed her goats. She had relied on the milk from those goats as the main source of nutrition for her whole family. Without it, they were going hungry every day. 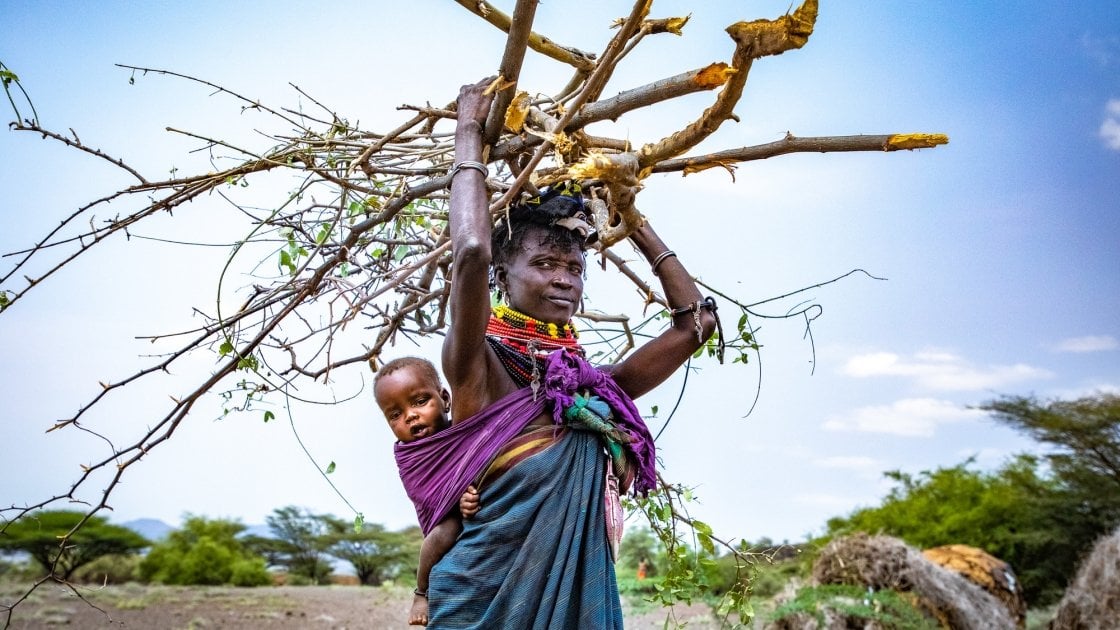 Atiir collects firewood every day to make money to feed her family. Recurrent drought has made it her only means of survival. Photo: Gavin Douglas / Concern Worldwide.

However, this picture tells a much bigger story. What really shines through is her incredible strength.

The firewood she’s carrying was the only thing separating her and her family from starvation. Every day she would walk for miles to collect this firewood and sell it at the nearest market to make enough money to buy one small meal for her family.

Often she has done this on an empty stomach, with a rope tied around her waist to stop the hunger pangs from getting her. She told me that she sometimes went 10 days without food, so that her children wouldn’t have to.

You can see her caring nature and her overwhelming love for her children as her youngest, Amoni, is wrapped tightly to her back. He had become malnourished from the lack of food. Throughout the entire day that I spent with this beautiful family, he clung adoringly to his mother with his every waking moment.

As Atiir and I talked, and I learned more about the awful challenges she confronted every day, it gave me some comfort to know that Amoni was now receiving the treatment he needed. And that Concern were expanding their operations in the region so that families like hers would not be facing this crisis on their own. But I was also acutely aware that it was Atiir who had kept her family going up until this point.

When I look at this photo I see the fortitude, the determination and the pride that stopped her from ever giving up. It perfectly encapsulates her spirit. They say a picture paints a thousand words and I think that’s never been more true than this picture of Atiir.

'Her bravery has helped her get back on her feet'

In 2020, Syria will enter its 10th year in crisis. Since it began, around 1.5 million people have escaped the violence of their home country to seek safety in Lebanon. In January, I travelled to Northern Lebanon to meet with some of these refugees who are beginning to rebuild their lives.

One of the people I met was Khadija*, a 42-year-old mother of three, who was a participant in Concern’s dairy treatment scheme. When I met her, she was just finishing a shift making halloumi with fellow refugees in a local dairy co-op.

Khadija fled Syrian with her family in 2013 after violence arrived in her quiet village.

“I had a great fear of dying. My greatest fear was losing my children. I always prayed to God that if my children were to die in Syria, that we would all go together,” she told me. 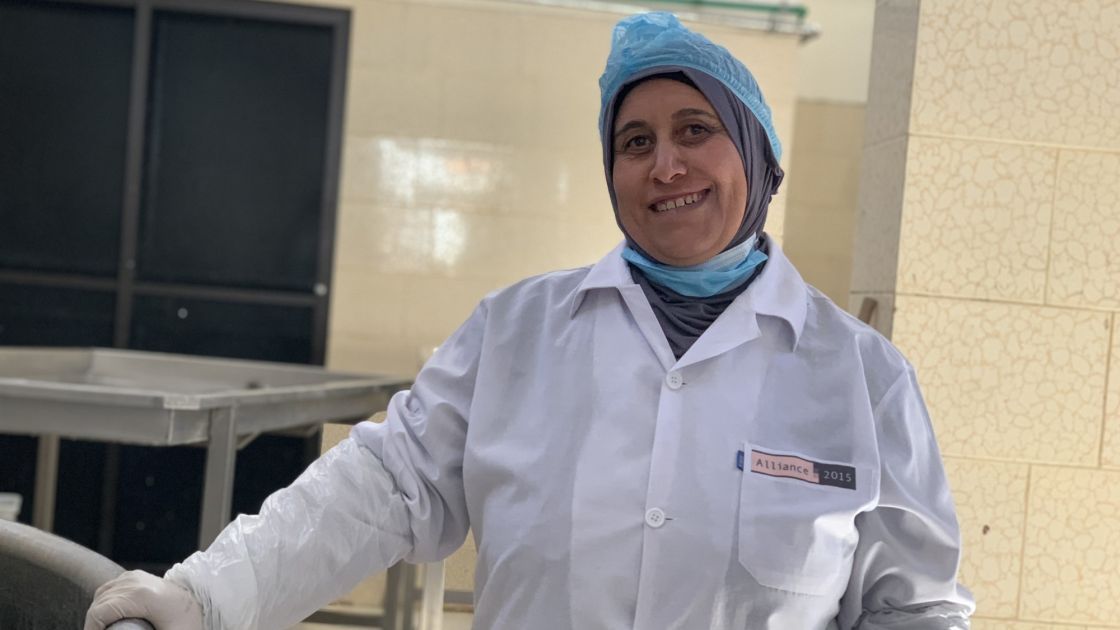 Even after all the passing years, she still keeps the keys to her home in Syria with her. She hopes to return when it’s safe to and use the same key for her new home.

“The best thing I love about myself, is that whenever I’m sad, I always like to laugh with my children. It makes me feel relief and helps me forget my pain,” she said.

“I wish that my children had everything they want. Everything I could not give them due to the conflict. I wish I could see them in high positions; Doctors. Teachers. Engineers. That is my dream for them and I am hopeful for it.”

Khadija’s story is far from the most harrowing account of survival I have heard this year. In fact, she is very aware that she and her family are the lucky ones. They are all alive and they are all together.

The reason it sticks out for me is that it shows there can be some normality and stability in the chaos of the Syrian crisis. Yes, Concern has certainly helped her along this journey, but her bravery, resilience and persistence have helped get her back on her feet.

'Seeing it all come to life was really something special'

International Day of Peace (on September 21) is a globally shared date for all of humanity to commit to peace above all else but sadly, this is a day that often goes unnoticed.

I had the privilege of helping Concern mark this day in 2019 by creating our very first mural outside of the (now unfortunately closed) Bernard Shaw, a cultural hotspot renowned for the arts. 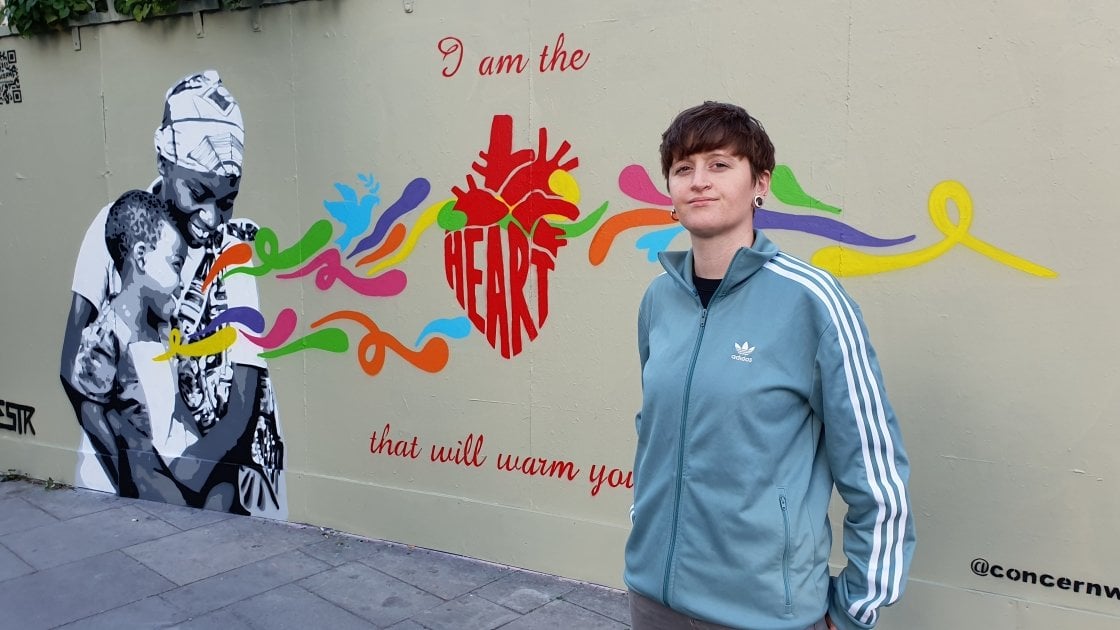 Artist Emmalene Blake standing in front of the mural she painted for International Day of Peace. Photo: Concern worldwide.

This project brought together the combined efforts of multiple artists including a strong-willed poet called Felispeaks, a skilled video production company called Nomos and a talented graffiti artist named Emmalene Blake. Having the opportunity of working with such a great bunch of talented individuals was an incredible experience and seeing it all come to life (with very few hiccups) was something really special.

To everyone who supported our work in 2019, thank you from all at Concern Worldwide! 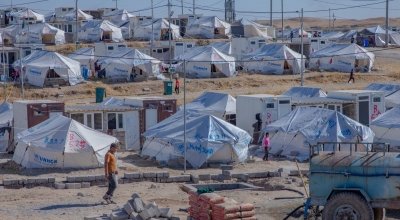 The Syria Crisis Explained: 5 Things to Know in 2021

March 2021 marks 10 years of the Syrian conflict. Here are 5 things to know about the impact of the decade long crisis. 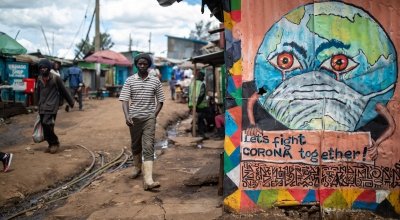 'Vaccine distribution must prioritise the most vulnerable, not the most wealthy'

The truism that ‘no one is safe until everyone is safe’ rings hollow unless the world commits to a vaccine distribution system that prioritises people based on their need rather than nationality, says Concern's Chief Executive Dominic MacSorley. 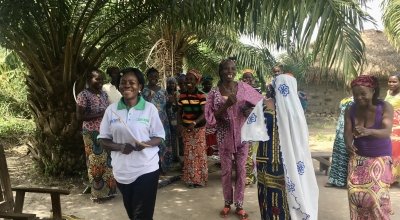 Concern and partners are working to support the socio-economic recovery of towns in South East of Central African Republic (CAR).