Mother of three Khadija* (42) is a Syrian refugee living in Northern Lebanon. She was very happy in her town in Southern Syria before the conflict broke out. In fact, she wants everyone to know that Syria was a nice place to be before she fled.

“I loved my home. I loved it a lot. I was very happy. Everything used to be so normal, as it should be,” she said.

“I would like to tell people that Syria was once such a lovely place that you could feel free in. It was stable. You always feel that you are missing something when you are not in your own country.”

Khadija, who was working as a housewife, says bombs were everywhere when she made the decision to leave Syria.

I had a great fear of dying. My greatest fear was losing my children. I always prayed to God that if my children were to die in Syria, that we would all go together.”

She and her children have now been in Lebanon since 2013. Her greatest concern while fleeing violence was whether her two daughters and son would be able to continue their education.

“I wish that my children had everything they want. Everything I could not give them due to the conflict. I wish I could see them in high positions in years. Doctors. Teachers. Engineers. That is my dream for them and I am hopeful for it,” she says.

“Now, I’m happy, but there are lots of things that I miss. I wish I could do the same things I could in Syria. Though those things are missing in my life, it’s okay. I realise how lucky I am.” 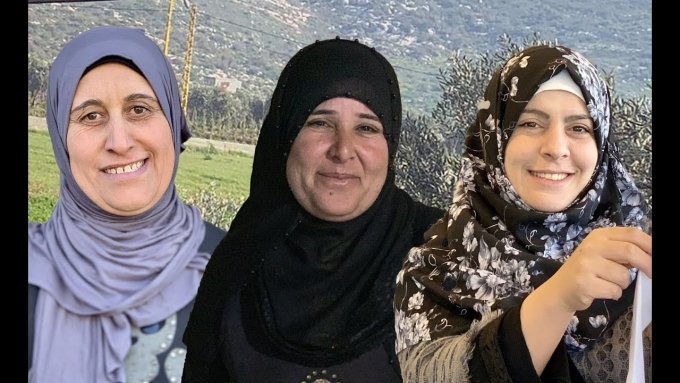 Khadija was one of 25 beneficiaries who were selected to work at local cooperatives, where she learned how to make all kinds of cheese, which are then sold locally.

“I was really happy with the training scheme’s credibility. The team was great. They taught us a lot. Now, I’m working at the co-op here in Northern Lebanon. I’m very happy with this work,” she said.

“I’m also learning about different types of cheese. I used to see them in stores, but I never worked with them. I got so much new information and even got a job out of it.

“I am very happy with the services Concern are offering me, because I’m participating on all occasions they do. My home is always open for their meetings. I’m happy that I have a really good relationship with NGOs, especially Concern.”

Despite being many miles away from her Syrian home, Khadija says the key to its front door is still her most treasured possession.

“I may have lost my home, but my keys are still with me. I aim to go back to Syria someday, rebuild my home and use the same keys for it,” she says.

“I’m living in a home, but there is no furniture. Nothing there but walls.

Khadija believes that a strong woman is ambitious and can reach her goal, while still doing her best for her family and children.

“The best thing I love about myself, is that whenever I’m sad, I always like to laugh with my children. It makes me feel relief and helps me forget my pain.”

Nawal* is a 40-year-old mother of 11 who fled violence in Syria at the start of the crisis. They now live in an informal settlement in Northern Lebanon.

The best thing I had in Syria was my home that kept my family safe. We were all together under one roof. That’s irreplaceable. Our life was beautiful.”

“Syria was not safe when I left. Every time the plane would come, we tried to run. We were so afraid of dying.”

Her mother-in-law and sister-in-law were killed in a bombing.

Nawal and her family would like to go back to their home country someday, when it is safe enough to return.

“The only thing that I really wish for, is that I wish to remain stable with my children next to me. That’s all I want in the world. I’m hopeful,” she says.

“I used to have lots of treasured possessions, but now, I’ve nothing left. Even those close to me. I couldn’t bring anything with me.”

Nawal was one of the beneficiaries who took part in Concern’s dairy processing training scheme. She now makes yoghurt and other goods for her family, while also selling them to eager customers.

“I don’t go door to door selling, but because my yoghurt is very good, people from all around have heard about it. So people come to me to ask about it and I sell it straight to them. There is also a Syrian man who buys from me and then sells them in the capital city Beirut.

“My training has improved my income and helps feed my family and I’m so happy for it.”

Nawal says it is particularly hard for female refugees, but she remains optimistic.

“I believe women can get the same opportunities as men, when she knows what she wants. Strong women can do anything once they put their minds to it,” she says.

“My mother always told me to love your family and do your best to help them prosper. I’ll pass this advice on to my own children.”

Nawal says her mini-business is very much supported by her husband Abed*, who she says understands how important it is for a husband to champion his wife.

“It’s very important for a man to support his wife in her life and her choices,” said Abed, who is also a Syrian refugee.

I always support my wife and stand by her. I give her everything I can give and I will continue to do so.”

Lama* is a Syrian refugee living in the north of Lebanon with her three children.

“I was happy in Syria before I came here. My favourite thing was my home and university studies. Everything was just great,” she said.

“I like to tell people that Syria was the most wonderful country in the world. It was so beautiful. Not now though, which is so sad.

“There was lots of bombs going off. That’s why we left the city to seek freedom. We fled to safety to several different places. Lebanon was the last. I was not afraid of death, but the conflict and the bombs terrified me.”

All of Lama’s family are now living in Lebanon and are too afraid to return to Syria any time soon.

“I hope things will be better in the future,” she said.

“All we can do here is either sit in our tents, search for work or see if there is any help being offered. Our options are limited.

However, I dream that my children can continue their educations without the need for charity or NGOs. I hope that will happen someday.”

In recent months, Lama has been attending embroidery classes with fellow refugees. Not only does she find it a fun pastime, but she hopes it might lead into a profession for her.

“Concern is helping me by giving me valuable embroidery training. I’m learning new skills every day. I would like to open a small embroidery and sewing business in the ITS [Informal Tented Settlement] I am living in,” she said.

“If that happens, I would earn money myself to help my family and I wouldn’t need the help of anyone else. I could feed my children and buy things for them all by myself.”

Advice for other female refugees

Lama says it’s important to say yes to every opportunity that comes your way, since you never know when the next one will come.

My advice to other female refugees is to take any job that are offered. You will always learn some new skill that could be of use in the future."

“Women don’t get the same opportunities as men. There are so many opportunities denied to me because I’m a woman. That goes for both Lebanon and Syria.”

*All names have been changed for safety and security reasons