Five years on, we can't let the Rohingya population down by ignoring their plight

Five years on, we can't let the Rohingya population down by ignoring their plight
Story23 August 2022Tony Cuddihy

Five years to the day since they were forced to leave their homes in Myanmar, the Rohingya refugees in Bangladesh live in fear of being forgotten.

Anowara Begum is a mother of three, living as a refugee for the last five years in camps in southeastern Bangladesh.

While one of her three children was born in Myanmar before Anowara and her family were forced to flee after the start of unrest in 2017, her two younger children have only ever known home as one of the many camps near the town of Cox's Bazar.

Close to one million people live in the camps, and Anowara's story of survival on food rations, food supplements and vouchers is not uncommon. She, like many of her fellow Rohingya, is making the best of an increasingly difficult situation.

All across the camps are stories of people who are living in cramped conditions, forced to live off aid provided by humanitarian organisations, without hope of education or the opportunity to rebuild their own livelihoods. 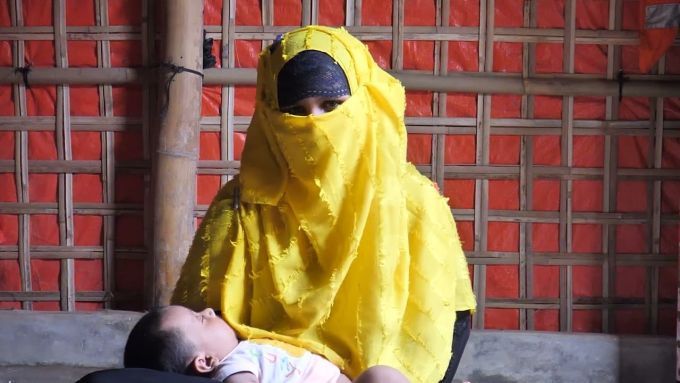 Fiona McLysaght, Concern's Country Director in Bangladesh, is concerned that the world's focus will turn away from what remains the world's largest refugee camp.

"The overall response to the Rohingya crisis is slipping off the global radar," Fiona explains.

"Given what's happening in Ukraine and other countries, this is having a direct impact on the Rohingya response. Once you go into the sixth year in any response, it's referred to as a protracted crisis, so inevitably it will get less focus than it has previously. That is a concern because there are so many global competing priorities.

"Donor countries, as well, have been impacted by inflation and increased fuel costs etc., so we're worried that there will be less money allocated to overseas humanitarian development aid."

The population within Cox's Bazar is increasing all the time, Fiona explains, with Concern's work in terms of nutrition also scaling up to try and reach as many people as possible.

"Year on year there are approximately 40,000 births, so the population is increasing every year. Our work has really scaled up, particularly in our nutrition programming. We're working in more camps - we're in 17 camps now - and we're taking on a lot of extra work in the response.

"There is also genuine worry on the government's side about where the money will come from to continue support to the people in the camps."

Despite the fact that there are children in the camps who have never seen Myanmar, and the fact that repatriation seems as far away as ever for the Rohingya people, formal access to education is not accessible to the population of the camps.

“The UN High Commissioner for Human Rights recently visited the camps meeting Rohingya refugees who, after repression and human rights violations, fled Myanmar five years ago to, in her words, 'get some safety.' She also advocated for education and livelihood opportunities for the Rohingya people," Fiona says.

Access to education, and ultimately the opportunity to earn money through livelihood programmes, is the only way for the Rohingya population to become somewhat self-sufficient and not wholly reliant on aid.

“Given the fact that there's less funding around, that's tough," she adds.

Given the dangers they would face by returning to Myanmar, people have no option but to remain in Bangladesh despite the lack of access to education, to work, to travel and to a dignified standard of living.

Travel restrictions hurting those with disabilities

People with disabilities, even children, who face a crisis within a crisis are limited when it comes to leaving the camps and receiving treatment that could greatly enhance their quality of life.

"I was talking to one of our NGO partners this morning and they work in the area of disability,” Fiona tells us.

“What they would like to see, in terms of supporting children with disabilities and conditions that could be treated and reversed like club foot, if they could transfer children out of the camps for a short time for treatment and recovery [they could be in a position to help them].

“But the permissions are not being granted. There are more and more restrictions being put in place on movement.

"There's already so much stacked against you if you're a refugee, but if you have a disability you're in a whole different predicament in terms of vulnerability."

Anowara and her family are just one of thousands living in difficult conditions at the camps. Photo: Afroza Sharmin / Concern Worldwide.

At Concern, our focus remains on helping people like Anowara, her family and others just like them - people who are essentially confined within tight spaces within the camps - to stay healthy and to maintain their dignity.

Fiona reveals that many of her Concern colleagues in Bangladesh have been working day in, day out for the last five years.

“They're frontline, they've been working throughout COVID-19, multiple emergencies and there's such competency and skill within the team,” she reveals.

"That's why we can draw on them for other emergencies around the country as well. Three of the staff were deployed within hours up to Sunamganj in the northeast to support another emergency, so they're a fantastic team.

"We need to try and make the connection with individuals, to make sure people keep their dignity. They're human beings and this crisis is on a huge scale.

“We talk about building resilience, and people here are really resilient, but how much can people be expected to bear?"