‘When you’re alone and surrounded by fields, no one can hear your screams’

In the year of the #MeToo movement, it’s vital that we not only embrace a more radical push for real gender equality, but that we harness this moment to ensure it reaches women in all regions of the world. Concern CEO and Chair of the Irish Consortium on Gender Based Violence, Dominic MacSorley, reflects on this year’s UN Commission on the Status of Women and its timely focus on rural women and girls.

The UN Commission on the Status of Women

The UN Commission on the Status of Women (CSW) is the main global intergovernmental body dedicated to the promotion of gender equality and the empowerment of women around the world, and in the context of UN processes, the negotiation of its annual outcomes is exceptionally inclusive.

Representatives of Member States, UN entities, NGOs and civil society organisations from around the world, were invited to attend and to speak about the experience of women and girls where they work. Concern and the Irish Consortium on Gender Based Violence (ICGBV), were there to ensure that the learning from the contexts in which we work was given a voice at the highest levels of power.

From an Irish perspective, this year was particularly significant for two reasons: it was the first year that Ireland had chaired a side event at the CSW, another incidence of Ireland punching above its weight in facilitating at the highest level of the UN, and it was chaired by Ireland’s highest ranking female diplomat and ambassador to the UN, Geraldine Byrne Nason.

Side event hosted by the ICGBV

Towards the end of the CSW, the ICGBV held a side event ‘on Good Practices in the Empowerment of Rural Women and Girls through Addressing GBV’. Despite fears that snow and exhaustion would hold people off, the event was packed with standing room only. The event was a great opportunity for the consortium to present and discuss our policy paper – published in advance of the conference – that spotlights the fact that on average rural women fare worse than men and urban women in virtually every area of life, and that they disproportionately experience poverty, exclusion, and the effects of climate change.

Ambassador Byrne Nason, who opened the side event, summed up the unique horror for rural women who experience violence, and the silence and isolation that compounds their suffering when she recounted the story of one woman who told her:

When you’re alone and surrounded by fields, no one can hear your screams. 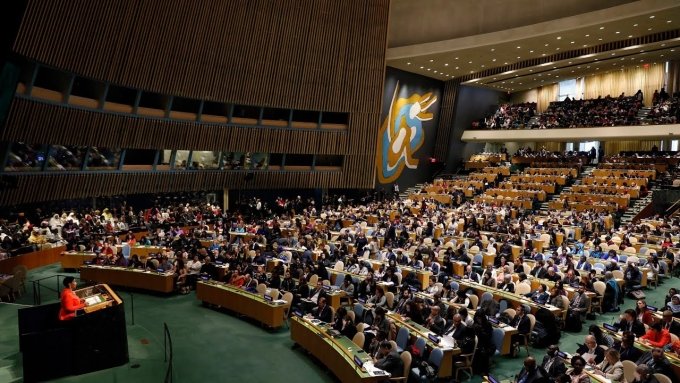 CSW62: Delivering a roadmap for the rights of rural women and girls

The side event was a success but it would be a mistake to think that chairing the session was not a huge undertaking. In truth, the process to get an eventual agreement was not without contention and the reality is that there is a very real challenge out there to drive consensus on the rights of women. What is perhaps most concerning is that states that are traditionally regressive in terms of women’s rights are now not the only ones holding up progress Countries such as the United States have become discernibly more conservative in their outlook and aggressive in watering down language on climate change, migration, human rights and reproductive and sexual rights.

But agreement was reached and this is a major victory. And the language of the final text is clear and unequivocal, with commitments to improving the lives of women and girls in rural areas in a wide variety of areas such as social services, land rights and the reduction of violence of violence against women. The head of U.N. Women, Phumzile Mlambo-Ngcuka, described the agreement as a “vital step forward.”

Enshrining the rights of rural woman

Though the CSW outcomes are not legally binding, their recommendations are a crucial tool in lobbying for women’s rights and holding governments to account in countries around the world. But we must remember that while policies and commitments are critical, they will never be enough. While I sat in conference room 11 at the UN I was reminded that it was 60 years to the month that then 74 year old Eleanor Roosevelt spoke about the progress of human rights and how it could be could be realised only by real impact on the ground:

Where, after all, do universal human rights begin? In small places, close to home —so close and so small that they cannot be seen on any maps of the world. Yet they are the world of the individual person; the neighborhood he lives in; the school or college he attends; the factory, farm, or office where he works. Such are the places where every man, woman, and child seeks equal justice, equal opportunity, equal dignity without discrimination. Unless these rights have meaning there, they have little meaning anywhere.

The challenge for all of us is to ensure that policies become practice and that the right to health, education, a decent livelihood, protection, respect, dignity and decision-making are realised for all, in particular the women and girls who are disproportionately denied such rights. This will continue to be our focus, as it has been for the past 50 years.

Hear more from Concern’s CEO Dominic MacSorley by following him on LinkedIn.