Terror in the hillsides: eyewitness to the second earthquake

The ground didn’t just shake – it rocked back and forth violently. The earth beneath our feet groaned as rock and dirt came crashing down the hillsides around us, consuming anything in its path. Across the foothills, clouds of dust rose into the sky, marking homes that had just collapsed into a mass of mud and stone. 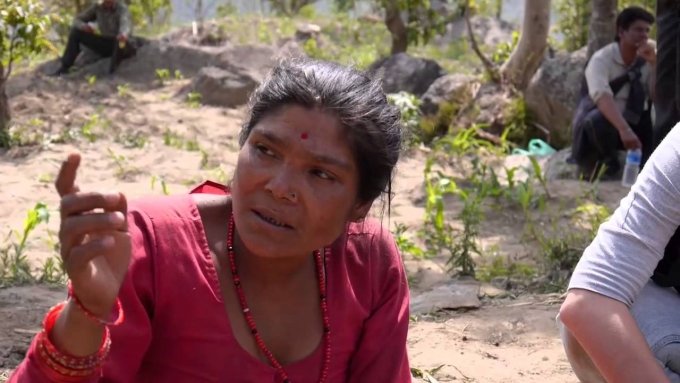 My colleagues and I were in Bhirkot, a village nestled in the forested hills of Dolakha district in northern Nepal. We were preparing to distribute shelter and relief supplies to more than 600 families today when a massive earthquake struck just before 1 pm. It was quickly followed by another big tremor, measuring 6.8 in magnitude, and dozens of aftershocks.

Villagers immediately crowded into an open field, trying to find safety. Shouts and cries filled the air. Many were terrified that their houses – weakened by the earthquakes and aftershocks of the past two weeks – had fallen and taken the lives of their children and loved ones they left at home.

We all waited in the field for a couple of hours as we all tried fruitlessly to make calls to friends, families, and colleagues, but the networks were simply overwhelmed. The ground continued to rumble and shake beneath us.

As people started to get word that their houses collapsed, they began to make their way back up into the hills. Many were at least two hours walk from home.

A woman sobs after a major earthquake rocked Nepal on Tuesday 12 May near Bhirkot in Dolakha district. Photo taken by Crystal Wells / Concern Worldwide.

We needed to make our way back to the district capital, Charikot, which is roughly an hour drive on a single lane road that snakes through mountains. We received conflicting advice on what to do – some said the roads were clear and that we should start making our way there before nightfall. Others said we were between two landslides, making road travel impossible. Meanwhile, rain clouds darkened the snow-capped Himalayas in the distance.

We decided to drive down from the village and see what we could find ourselves. On our way down to the main road, we came across another village, where home after home was flattened. The sound of a woman wailing grew louder and louder.

Sitting in a cornfield, surrounded by neighbors and family, sat a woman, tears streaming down her face as she cried into the sky. Her six-year-old son was killed after being buried in the heavy stone that had made up the family’s home.

We soon confirmed that landslides were blocking the road in both directions, giving us no choice but to walk out and meet a car on the other side. Our driver took his car to the safest place we could find and we set out on foot. Boulders and debris littered the winding road as we passed people carrying whatever belongings they salvaged, trying to find an open space and where they also might receive help.

Two kilometers or so later, we reached the landslide that stopped all road traffic from Charikot to Bhirkot. What seemed like an entire hillside had come crashing down. Rock, dirt, and trees were scattered across the road as we tried our best to move quickly, for fear another aftershock could strike as we were trying to pass.

This rockslide, caught on camera during the earthquake near Dhunche in northern Nepal, illustrates the fragility of the surrounding landscape at this time. Video Credit: James Shaw / Canadian Red Cross.

We reached our car sometime after 5pm and snaked our way through the valleys and hillsides on the way to Charikot. And while I was relieved to not have to spend the night in the valley, I was overwhelmed by a familiar feeling: the guilt that I have the means to leave, to retreat to comparative safety, while thousands of others have nowhere to go but to sleep in the open, beside their ruined homes.

Here in Nepal, the needs left by the earthquake on 25 April were already staggering. Hundreds of thousands of people lost their homes, taking with it all that they owned and worked over the years to build. And for some, like the bereaved mother we encountered on the hillside today, their loved ones.

All of that was deepened with today’s earthquakes. While we do not yet know the full scale of today’s tremors, our experience in Bhirkot today made it clear to us that many more families have been left homeless and more people have been killed. That makes our mission to reach people with relief supplies more critical than ever before.

The Irish public has already generously donated over one million euro to the Nepal Earthquake appeal. But we still need your help. Please donate today.