The stolen future of Syria’s refugees

Concern Worldwide’s Communications Director, Sarah Martin, has just returned from Lebanon and reports on the conditions for Syrian refugees there.

Speaking to Concern’s Country Director Elke Leidel in a Beirut café just hours after suicide bombers have wreaked havoc in the city leaving over 40 people dead, she describes the desperate situation of the 1.2 million Syrian refugees in Lebanon.

They are too vulnerable to leave. They can’t go back to Syria as it is. They have lost hope. They would go home immediately if the fighting stopped.

Concern works directly with over 140,000 Syrian refugees in Lebanon. These refugees do not live in the stereotypical refugee camps that appear in news reports, however. Instead they are dispersed around the country living in both rural and urban areas in all sorts of accommodation: old farm buildings, sheds, and under tarpaulin. For this reason they have been described as ‘invisible’ refugees. They came from Syria over four years ago only expecting to stay a few months and now, with no end in sight to the conflict, they are trapped in a foreign country.

The regulations permitting Syrians to stay in Lebanon have been in flux over the past few years. Since January 2015, any Syrian refugee over the age of 15 must pay US$200 and produce a long list of documentation in order to get six months residency in the country. They must also pledge not to work. As a result a large number of Syrian refugees do not register, have no valid documentation, and are at increased risk of arrest and detention. This places limitations on their movement and means they have more restricted access to humanitarian assistance, protection, healthcare, education and livelihoods.

The majority who are not allowed to work often make arrangements with landlords to work for them in lieu of paying rent. Some of the families, assessed as most vulnerable by UNHCR, get small cash grants. Others only receive a US$21 World Food Programme food voucher per person each month which they can use to get a limited number of food items in specific local shops.

They have used up all their savings. They have borrowed money from friends and relatives. They are at the end of their coping capacities. These people are now resorting to desperate measures in order to survive. 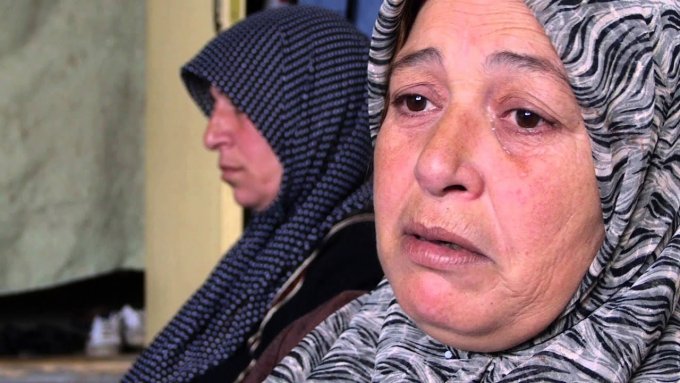 Leaving Beirut we drive along the coastline, through Tripoli and onwards to Halba where Concern’s field office is based. Many of the Syrian people with whom Concern works are living in different types of housing in the surrounding hills and valleys of Akkar, the poorest region in Lebanon.

About ten kilometres from the Syrian border I meet Hanen*. She lives here with her extended family and fifteen other families in what is known as a collective centre. From the nearby hills Homs can be seen in the distance.

This collective centre was a partially-built chicken farm until Concern took it over, built walls, put on roofing, installed windows and weatherproofed it so Syrian refugee families could live there. Concern also provides clean water, electricity and gas.

Through our translator, I ask Hanen, a mother of four children and grandmother to five, why she left Syria: “The bombs!” she replied.

We were forced to leave. They were bombing our house so we left. We fled without anything, not even clothes.

Hanen wept as she told me her daughter had been left a widow after her son-in-law was killed by a bomb. The day after the bombing they scoured the area and managed to find his torn off limbs which they buried alongside his body.

Many of the men living here in Hazouri bear the scars of war. Yet, they dream of returning to their homeland and if they could they would go back to Syria right away.

Syrian children living in an informal settlement near the city of Halba in Northern Lebanon. Photo taken by Kieran McConville / Concern Worldwide.

I ask Hanen about the young children’s education. “They have been out of school for the last four years. Their futures are stolen”. “What about the teenagers,” I ask? “They have all been married off.” replies Hanen.

Since the Syrian conflict erupted almost five years ago there has been a marked rise in early marriage which helps families to cope economically. Amina, who is fifteen, says she no longer dreams about her future but hopes that she will get married soon like her sister who is just 17.

Amina tried attending the local school but she suffered from discrimination and found the Lebanese curriculum and the French language too difficult for her.

More than 200,000 Syrian school-aged refugee children are out of school. Concern is making great strides towards educating young Syrians. Since mid-2014 we have taught over 5000 Syrian children with a specially developed numeracy and literacy programme designed to prepare them to integrate into the Lebanese school system. We also run a homework support programme for Lebanese and Syrian children who are at risk of failing classes or dropping out of school.

Seeing them in a tent sitting on coloured cushions and practicing their writing and drawing was like seeing them in another world. You could tell they had forgotten for that time that they were refugees.

As my colleagues and I say goodbye to the families in the collective centre we thank them for showing us their home but they insist that they want to thank Concern for giving them hope at this difficult time. Leaving the room where we’ve sat chatting for the last hour or so one of my colleagues apologises to Hanen for dragging up the bad memories from Syria. Hanen smiles gently.

No, don’t apologise. I want to remember where I came from so I never forget. My home is Syria

*Hanen's name has been changed for security reasons.

We need your help

Families like Hanen’s urgently need help to survive the harsh conditions in Lebanon. A donation from you could save lives this winter. Please give what you can.

Following the Beirut explosion and Lebanon’s COVID outbreak, Concern works to avoid a humanitarian crisis by providing clean water and shelter to the most vulnerable
News
12 March 2020

It might be relatively safe now, but for Syrian refugees living in Lebanon, their todays and tomorrows are still consumed by uncertainty.
News
19 March 2019

Find out how empowering women and girls and helping rebuild their lives plays a key role in Concern’s humanitarian response to the Syrian conflict.

Following the Beirut explosion and Lebanon’s COVID outbreak, Concern works to avoid a humanitarian crisis by providing clean water and shelter to the most vulnerable
News
12 March 2020

It might be relatively safe now, but for Syrian refugees living in Lebanon, their todays and tomorrows are still consumed by uncertainty.
News
19 March 2019

Find out how empowering women and girls and helping rebuild their lives plays a key role in Concern’s humanitarian response to the Syrian conflict.