This week, the 55th BT Young Scientist and Technology Exhibition is taking place in Dublin. We caught up with three groups from schools whose creations could help the developing world.

A simple solution to an emerging pest problem

Three Limerick students may have the perfect solution to a crop-destroying caterpillar that has devastated agriculture in Africa and Asia. The Fall Armyworm devours crops during the caterpillar phase of its life and can spread at up to 60 miles a day.

Almost all sub-Saharan countries have reported infestations which have affected millions of hectares of crops.

However, young scientists Shane Baguio, Joanne Lai and Marcelina Krzywdzinska have come up with a simple solution to beat the bugs.

They have devised a simple way to trap these worms, using only a plastic bottle and a light. They hope that their project could be used by farmers all around Africa and Asia as a way of dealing with this emerging problem.

The Desmond College pupils are in the senior category of this year's competition. 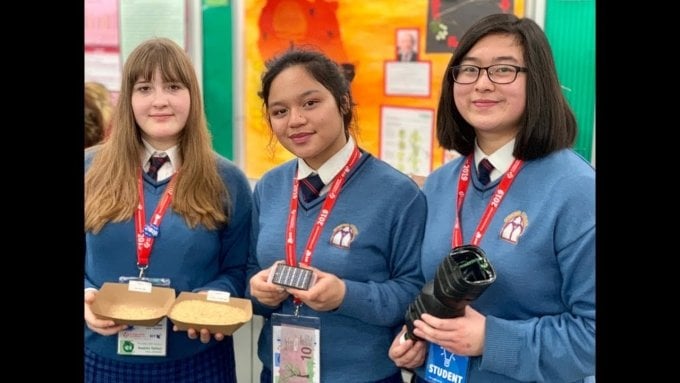 This is a special exhibition for Donegal students Rory Coleman and Rachel Fletcher, since they are the first pupils from Scoil Mhuire in 25 years to bring a project to the Young Scientist exhibition.

The duo created a system where gravel can replace soil in countries most affected by global warming. The roots of plants water cress and spinach plants extend into water below, while goldfish creates nitrates which feed the plant. While all this is going on, an attached solar-powered pump aerates the water.

The team — who came up with the idea after watching  BBC's Countryfile — hope to scale up the project at a later date by using even bigger fish. They think people in Ethiopia in particular could benefit from this genius but simple creation.

Wicklow student Seán Byrne has come up with a simple way to remove pollutants from water using egg shells.

During his research, the Avondale Community College student found out that egg shells have an affinity to heavy metal ions. Through further investigation, Seán discovered that he could remove microplastics from water just using egg shells.

Last year, research showed that the number of tiny plastic pieces polluting the world’s oceans is vastly greater than thought. According to Seán, there are around 51 trillion microplastics in the world's waters. He hopes his project will not only stop this form of pollution, but it could also remove some of the existing plastics.

Praise from past winner

The two winners of the first Young Scientist Kenya exhibition flew in to look at what Ireland's young scientists have on offer. Wilson Irungu and Abdirahman Sheikh Ali said they were delighted to be In Ireland and were very impressed with what they have seen so far.

"It's a very nice place to be. There's not much difference between Young Scientist Kenya and what you have here,"Abdirahman said.

"I've walked through the hall and have seen some mind-blowing projects. It's very exciting.

"I like how the kids here are very passionate about science. It really is great to see."

Wilson and Abdirahman created an internet-based energy monitoring and audit system, which won them the competition in Kenya. The award was presented to them by Kenyan President Uhuru Kenyatta.

Abdirahman and Wilson from Kenya are in Dublin for the exhibition. Photo: Jason Kennedy/Concern Worldwide

Are you a pupil, parent or teacher? Here's how you can get involved in Concern's work.