#Concern50: Our rich history in Ethiopia 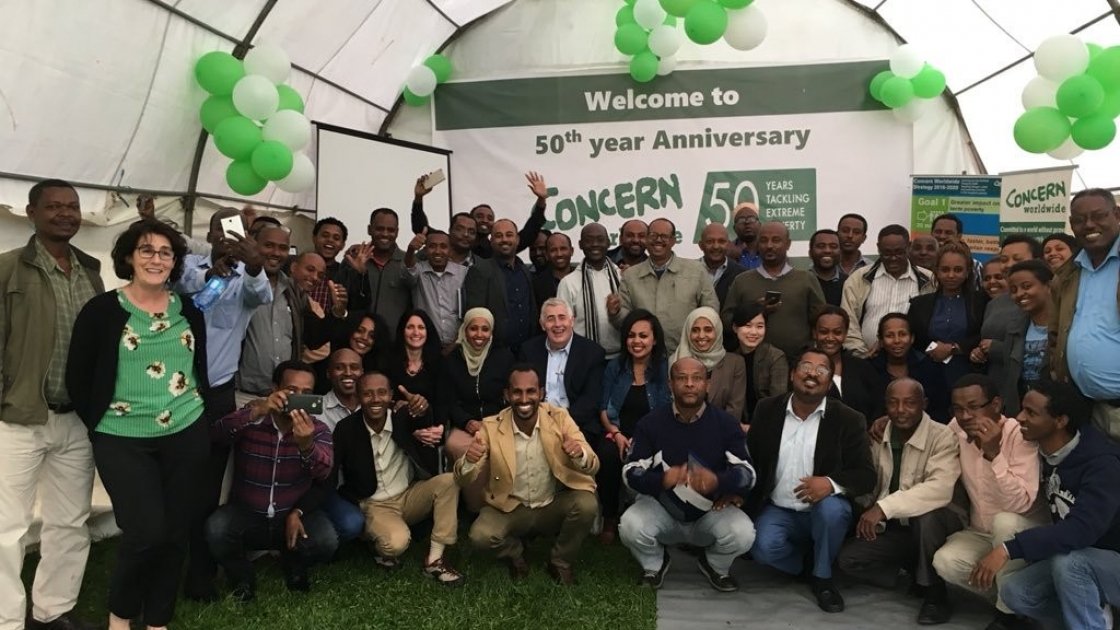 Marking a milestone year in Concern’s history, CEO Dominic MacSorley visited teams on the ground to thank them for their hard work and dedication. In the second of a series of blogs documenting his experiences, Dominic pays tribute to our team in Ethiopia.

As we mark 50 years of Concern, and thank our country teams, it was of crucial importance to me to visit our teams in the Horn of Africa and the surrounding region. This part of the world has suffered all too much from the scourges of drought, famine, conflict, and now the effects of climate change. It is also home to some of Concern’s oldest, largest and most ambitious country programmes. Ethiopia is a country that has been at the heart of Concern for many years and it was very fitting that it was our first stop in the Horn of Africa region.

For almost as long as Concern has existed, there has been a team in Ethiopia. The team have worked through the extreme hunger crises that have hit the country and helped to lay the groundwork for long-term development in Ethiopia’s most remote areas. It was here that we piloted Community Based Management of Acute Malnutrition – the revolutionary method that went on to transform how the world treats malnutrition, and when I visited, I could see that this innovative spirit is alive and well amongst the staff in Addis Ababa. The late Jack Finucane had a very close association with the country and when I visited, the team spoke about him with passion.

I was particularly pleased to be met at the airport by Waldit. As a young man in the 1970’s, he fled Ethiopia, travelling to Sudan on foot. In 1984, he was living in a refugee camp in eastern Sudan and was hired to work with Concern as our driver, which he did for many years. Returning to Ethiopia, he has now worked continuously with Concern for 32 years.

We had an excellent meeting with Sonja Hyland, the Irish Ambassador, who complemented the quality of Concern’s work in Ethiopia and the excellent reputation that we had earned over the years. Our conversation centred very much on current challenges in Ethiopia including increasing numbers of refugees from neighbouring South Sudan and the ongoing recovery from successive devastating droughts. But we also spoke about the historic pact that had been signed between Ethiopia and Eritrea that week, which has ended 20 years of hostilities. At a time where global conflict has soared, this great breakthrough seemed to come out of nowhere. But in fact, it was a product of tireless background conversations and a steady push for demilitarisation in the region. As we approach our own conference to search for solutions to conflict, hunger and human suffering this September, the agreement is a great injection of confidence in the power of diplomacy, and the need to revive it as a method for resolving other conflicts.