Ethiopia: Resilience has its limits

A valley in Amhara. In some parts of this region it hasn't rained properly for three years and all water sources have dried up. Some people walk up to five hours a day to collect water. Photo by: Kieran McConville/Concern Worldwide.
News20 May 2016Aoife O'Grady

Failed spring rains drove drought leading to food insecurity, malnutrition and water shortages. Resilience-building has provided a significant buffer, however even the strongest communities have their limits.

In the Amhara region of northern Ethiopia, people rely almost exclusively on agriculture for their income and food. The rains only come once a year between June and August, and last year, the rainfall was negligible. This meant the harvest was a disaster. This year some areas are still in drought – with farmers desperately ploughing parched ground. 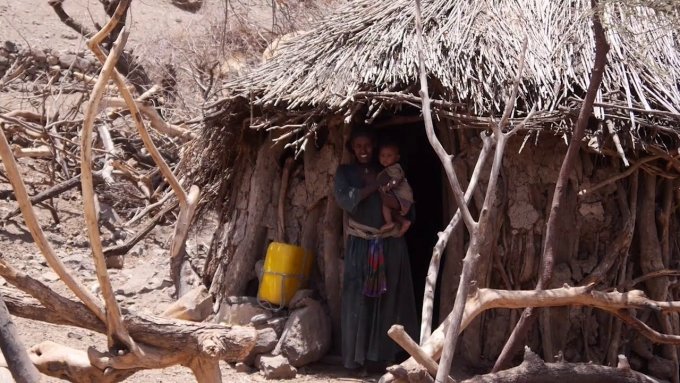 “My milk has dried up”

Zemet Mesela is a single mother and homeless. Her breast milk has dried up because she had not eaten properly for days. She told us that her situation is so desperate that she would prefer to die. As any mother will understand, she keeps going for the sake of her baby daughter, Tazebe.

In Ethiopia, Concern is focused on reaching highly vulnerable mothers and babies like Zemet and Tazebe. We’re providing her with a blend of corn and soy along with a supply of oil to boost their diet. We’re also supporting government health centres, and training public health workers to treat cases of acute malnutrition. Across the country, our teams are reaching some 250,000 children under five years of age with supplementary food.

Water supply is a huge issue in some areas. When we talked to Igrem Banti, he told us it hadn’t rained in his valley for three years. Springs and wells had all dried up. Concern is trucking thousands of gallons of water to affected areas every day – a lifeline for people who would otherwise have to leave their land to survive or walk up to five hours each day to get water.

In the South Wollo Zone of Amhara, we met Emeyet Yimer Yessin. Before Emeyet got involved in our programme, she and her seven children were struggling to cope. She told us:

My life was in a miserable condition, and I was very poor without assets or livestock, not even a hen or a cock.

With Concern’s support, Emeyet purchased four sheep and a calf. She also began growing Irish potatoes, acquired through our crop diversification programme. Potatoes can be stored for longer than other crops, and provide somewhat of a buffer to food shortages and drought.

However the potato is not drought resistant, and due to failed rains, Emeyet has been unable to plant in recent seasons. Looking around, she sees how her livestock and assets – she also now a member of the local saving and credit cooperative (SACCO) – have allowed her to cope with the drought far better than some of her neighbours.

30 years ago the world watched as the horror of Ethiopia’s most infamous drought unfolded. As talk of malnutrition intensifies, many are now asking: has nothing changed? Concern has been on the ground in Ethiopia for 40 years and we can tell you that monumental change has occurred. As our CEO, Dominic MacSorley commented recently:

The Ethiopia of today is unrecognisable from 30 years ago.

The government has put in place robust early warning systems, disaster risk reduction infrastructure and an ambitious social protection programme. And our teams have been there working alongside them with other NGOs and communities to help Ethiopians build up resilience. Just one example in Amhara is an Irish Aid-funded programme which has supported 3,002 households to reclaim and transform 1,018 hectares of formerly unproductive land and has trained hundreds of households in reducing the risk to disaster, like drought.

This resilience-building work means that Emeyet and others like her are weathering this fierce storm better than most. However resilience has a limit. With 10.2 million people in need of food aid, the situation – particularly in the north and east of the country – is acute and the emergency is intensifying. The fact is that no one country can handle the scale of this crisis alone.