Four million people on “edge of disaster” in South Sudan

The world’s youngest nation, besieged by conflict, is in the grips of its worst hunger crisis in years. 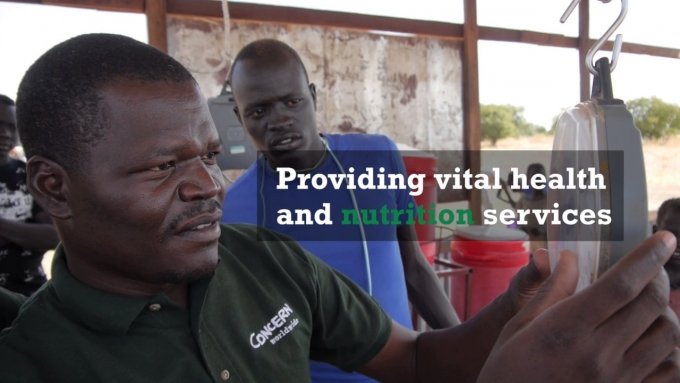 According to a World Food Programme Report, an estimated 4.6 million people in South Sudan will be severely food insecure between now and April 2017. That’s over one third of the country’s population. The region of Northern Bahr el Ghazal continues to face the highest levels of hunger, with 86% of the population food insecure as of July 2016.

As alarming as these figures are, the worse may be yet to come – it’s believed that the situation will deteriorate further during the peak of South Sudan’s lean season, between May and July.

South Sudan has been wracked with violence almost since its birth in 2011, and the conflict has had a devastating impact on food production and availability. Millions are now food insecure, meaning they lack the reliable and consistent access to food necessary to sustain them for long stretches of time.

Northern Bahr el Ghazal in northern South Sudan is one of the country’s most vulnerable regions. It has seen a protracted economic crisis and market failure, and many of its residents have depleted (or even completely exhausted) their meagre assets just trying to survive. 86% of the population in Northern Bahr el Ghazal was food insecure as of July 2016, with nearly half severely so. This is an alarming increase from last year, and the most dire level of hunger since the outbreak of conflict in 2013.

The situation in the country around food security is extremely serious, especially for young children."

Noel adds, “Current humanitarian interventions prevented a total tragedy. However, we are on the edge of catastrophic conditions for the citizens of South Sudan. With agricultural production and the recent harvest seriously affected by fighting and climate change, devaluation of the South Sudanese pound, markets with limited supplies, and an escalating civil war in numerous locations all over the country. People simply can no longer afford basic food items, On top of all this, the country is also struggling with a serious outbreak of malaria.”

Puru Wani and 14 of her extended family fled their village on the outskirts of Juba when fighting broke out in July. Now they are staying in two small shelters at a protection of civilians site beside the UN base in Juba. "Our village is destroyed. Everything was looted - there is nothing to go back to," she says, "and If we did go back we would be killed."

Food insecurity here has been driven by a number of factors, and chief among those is conflict. Renewed violence over the summer has internally displaced 36,000 according to UN estimates, preventing farmers in crop production areas from harvesting. Many lost their livelihoods, as well as savings and food stores, when they fled the recent fighting that killed more than 300. As Concern and its partners showed in the 2015 Global Hunger Index, there is a clear link between conflict and hunger, as fighting interrupts trade, contributes to inflation, and makes it difficult and dangerous for farmers to till and seed.

Every year, South Sudan faces a 'lean season'– a period of cold weather and flooding or severe dry spells during which there are few crops to harvest – and farmers frequently rely on wild foods in the forest and food aid to survive. Poor harvests this year have extended the lean season, leading to an increased demand for a dwindling supply of food. This situation, coupled with the devaluation of the South Sudanese Pound, has led to soaring prices for basic food items like oil, salt, sugar, maize, and sorghum.

The serious decline in the value of the South Sudanese pound has only increased hardship for the country’s poorest, who do not have the assets to cope with the rising prices of food and medicine (such as antimalarials) and must now devote larger and larger portions of their income to covering basic needs.

Many families are no longer able to afford protein or maintain a varied diet, and because almost all resources are devoted to buying food, there’s no money left for hygiene products like soap, or medicine. Many people – particularly children – are now suffering from diarrhea and other stomach illnesses.

Anur Bol, a 30 year old mother of seven, explains the direct impact of market decline on her household: “I can only afford to buy less than half a pound of groundnut paste, a small portion of okra, and less than half a pound of fish powder to eat with the sorghum and wild vegetables. Market prices have become unfriendly; in 2014, we were spending 80 South Sudanese Pounds [currently 15 cents USD] for a malwa [7.5 pounds] of sorghum, but this year between June and October, a malwa of sorghum was going for 300 South Sudanese Pounds.”

Eating just once a day

Any day that Anur can eat more than once is a good day. Married to a 70-year-old man who is not able to help care for the family, she is the backbone of her household. Her home is one of thousands in northern South Sudan that has been increasingly visited by hunger.

I leave home early in the morning and spend long hours in the bush in search of firewood and charcoal."

Without adequate nutrition, Anur’s youngest child, one-year-old Rezeek, has become malnourished and required three visits over the last eight months to a stabilization centre, where the most severe cases are treated. The extent of malnutrition is taking a huge toll on the health of mothers and children in this area of South Sudan, but Concern is working hard to reach children before their condition becomes as severe as Rezeek’s. In the two counties of Aweil North and Aweil West alone, Concern Worldwide has recently treated over 8,000 children under the age of five with severe acute malnutrition.

Concern Worldwide has noted a 75% increase in children in Northern Bahr el Ghazal with severe acute malnutrition this year, and, after conducting extensive screenings in the cities of Aweil West and Aweil North, estimated that around 30% of the population is malnourished. To help provide treatment for malnutrition, Concern is supporting three stabilization centres, and 42 outpatient therapeutic programmes where people can receive nutrient and protein rich foods. We have also provided children with antimalarial tablets to help control the malaria outbreak.

To ensure that children across the community are receiving all the nutrients they need, Concern has also reached nearly 20,000 kids through a supplementary feeding programme, which provides all families in the community with nutritious and diverse foods to add to their existing diet. Concern has also conducted training sessions on Community Management of Acute Malnutrition, in collaboration with partner organisations. In coordination with the World Food Program, Concern has begun a series of food distributions, targeting close to 40,000 households.

Thank you for helping us to stand with the people of South Sudan and the most vulnerable in 27 other countries.