“My only dream is for peace in my country” 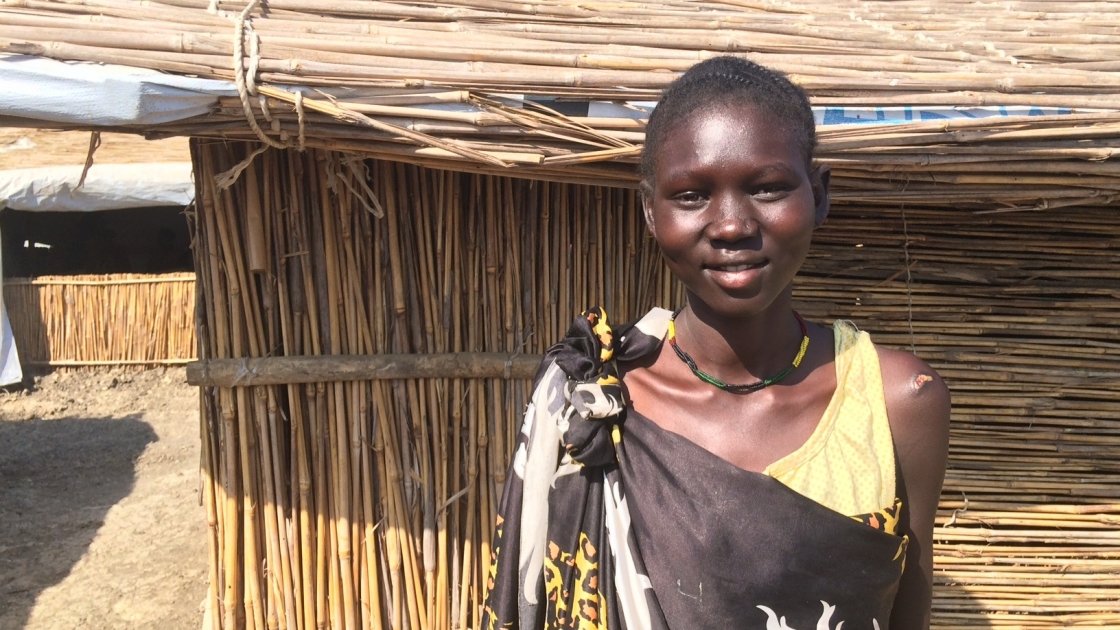 In this, her second report from South Sudan, Concern’s Director of Communications, Sarah Martin, recalls a meeting with Maria*, a young mother-of-two living in the Bentiu camp.

Displacement and violence in South Sudan

Arriving by car one immediately notices the strong UN peacekeeping presence – UN watchtowers are dotted along the perimeter, which is patrolled by UN peacekeepers, and UN helicopters hover overhead.

Clouds of dry, red dust billow in the air, leaving a coating on one’s skin. Ominous marabou storks survey the land for any morsels worth scavenging, while yellow billed kites glide and dive in the bright blue skies.

While visiting Concern’s nutrition centre in the camp, I meet Maria. She lives here with her husband, her three-year-old son and her six-month-old baby girl. When I ask her when and why she came to Bentiu, she says:

I saw lots of people being killed in front of me in Bentiu [town]. My mother, my brother and my brother-in-law were killed. I am lucky because my husband wasn’t killed and he is here with me in the camp.

Despite all of this, Maria is happy to be in Bentiu POC with her family:

“I feel very safe here in the camp. I get clean water, food and treatment.  This is good.”

But it’s not easy.

Maria’s life revolves around collecting firewood, as her livelihood depends on it:

“When I wake in the morning I think ‘I must go and get firewood’. Then I leave the camp and get firewood. I bring it to the market and sell it and then with the money I can buy some food for my children.”

Despite its innocuous appearance, this is a dangerous task to undertake: especially for women and girls. Maria tells me of a particularly harrowing experience.

I saw three different women being raped by soldiers when they were out collecting firewood.   I brought them back to the camp to get help. They were looked after by the organisations in the camp.

People often arrive to the camp suffering from malnutrition but thankfully, Concern has implemented a number of nutrition programmes to help alleviate this condition.

Maria is attending Concern’s nutrition programme for pregnant and breastfeeding women. Speaking of her experience, she says:

“Two weeks ago I was feeling weak and getting dizzy a lot. I came to Concern’s nutrition centre and they told me they would look after me.”

Needless to say, life in Bentiu POC is tough but the dignified resilience of those who live here is humbling. As our conversation nears an end, l ask Maria if she has any dreams or hopes for the future, she says.

My only dream is for peace in my country. I am so worried about my family who are in other parts of the country and not in protection camps… I just ask God every day that no illness will affect my children and that someday they will go to school

You can support women affected by crisis like Maria by donating to our work in 24 of the world's poorest countries.