"We ate dried water lilies to survive": A story of famine 175 years after the Irish famine

"We ate dried water lilies to survive": A story of famine 175 years after the Irish famine
Story12 May 2022Emma Kelly

This year marks 175 years since Black ‘47, the worst year of the Irish famine. Around 1 million Irish people died between 1845 and 1851 from starvation or hunger-related disease following a devastating potato blight that decimated crops.

A further 1 million people emigrated, resulting in a loss of a quarter of the population.

Each year, Ireland remembers the devastation caused by the famine, and in schools, children learn about the “Great Hunger” in their history books. But unfortunately, for millions across the world, famine is not something that is in the past for them. 44 million people are at risk of dying of starvation in 2022, and conflict is the biggest driver of food insecurity worldwide.

As we remember one of the worst periods in Irish history, we must acknowledge that elsewhere, hunger and famine persist. Concern Worldwide has worked with two artists - one Irish, one South Sudanese - to create a mural in Dublin to shine a light on how history is repeating itself, and to remind us that Nothing Kills Like Hunger.

The mural is a collaboration between two artists - Abul Oyay from South Sudan, and Emmalene Blake from Ireland. Emmalene has painted from the Irish perspective, with her design depicting the Irish famine, the 175th anniversary of its worst year, known as Black ‘47, being commemorated this year. Abul’s piece was inspired by growing up in South Sudan through famine, and having so little food that she and her grandmother turned to eating dried water lilies.

Emmalene has taken Abul’s work and incorporated it into a mural on North Brunswick Street in Dublin, reminding us that while we are commemorating the Irish famine, famine is sadly not a thing of the past.

Abul’s contribution to the mural depicts her experience as a five-year-old child, living in Malakal in 1991 after leaving a refugee camp in Gambella, Ethiopia. Unbeknownst to Abul, a famine was ongoing in her home, and her grandmother had to find other ways to put food on the table.

Speaking from Juba, Abul told us: “When we ran away from Ethiopia to Malakal in 1991, there was a time where a lot of us depended on food aid, and then there was a time there was no food coming in, so we had to look for other ways to survive.

“Grandma used to get the water lilies, and we would get the seeds and dry them and pound them into a powder. We would make asida (a kind of cooked dough) with it and eat it with a sauce. Of course, when you’re young, you’re not told about famine, so for me, it was just any other food. But later on, when I was grown, Grandma would explain what happened at the time and how she had to look for ways for us to survive.”

In 2015, Abul, whose work brings to light “the past, present and hope for the future of South Sudan and its pursuit of a stable ground in the world”, created this painting as a gift for her grandmother, who would know exactly the hardship the painting was portraying. However, Abul knows that everybody will have a different understanding of the piece. “For other people, it could be a little girl collecting flowers with her mum. I think everybody relates to it in a different way. I know what I’m painting, it’s very personal to me, it’s something that I’ve gone through.

“We all understand art in many different ways. Whichever way we look at art, our own understanding of it is very relevant to us. As an artist, I feel like it’s easier for me to say what I want through art. Being in a place like South Sudan, where I can’t just go and scream out how I feel, it’s easier to put everything on canvas.”

The Nothing Kills Like Hunger mural at North Brunswick Street, Dublin. The public are urged to sign the campaign petition.

Abul’s painting will sit alongside Emmalene’s depiction of the Irish famine, which ended 170 years ago. One of the main reasons she agreed to contribute to the project was that it reminds us that famine is not a thing of the past. She said: “It’s something people have gone through 175 years ago, and yet here we are today, in South Sudan but also many other countries, famine is still going on. For me, it was acknowledging that yes, it is still happening, but also, how Ireland got out of the situation and how we in South Sudan can get out of famine.

“Life is different in so many places. What I would say to the people of Ireland is you are marking 175 years of the worst year of famine and it is history. But somebody somewhere is going through exactly what your ancestors went through.”

Abul - who is the founder of the Baobab Art Foundation, an artist space and exhibition gallery for South Sudanese artists - is also hoping to show the strength of the South Sudanese through her work. In the coming months, it is expected that 8.3 million people, or 70% of the population, will face extreme hunger, according to the United Nations’ World Food Programme, with conflict, climate shocks and rising costs driving food insecurity. Over the past decade, conflict has been a major driver of hunger in the region. But Abul wants her artwork to depict “a South Sudanese woman with her head up high. She’s striving every day to survive but still has so much elegance and self-respect. We are going through this, but we are still standing strong.”

Emmalene Blake is based in Dublin, and has been working as a street artist since 2013, a year after graduating from Dublin Institute of Technology with an Honour’s Degree in Fine Art. Emmalene - also known as ESTR - has become well known for her street murals around Dublin, depicting pop culture stars including Siobhan McSweeney and Nicola Coughlan of Derry Girls, Dua Lipa and Lizzo, and received attention for her lockdown-themed artwork from both Irish and international media outlets during the COVID-19 pandemic. Her own work is often influenced by human rights campaigns, environmental issues, mental health awareness and homelessness.

Emmalene has previously worked with Concern Worldwide on a mural to mark the International Day of Peace in 2019. The work, which was painted in Dublin, depicted Clotilde Ndayisenga and her daughter Ines, Concern beneficiaries in Burundi, and was inspired by the poem “I Am Humanity” by Felispeaks. 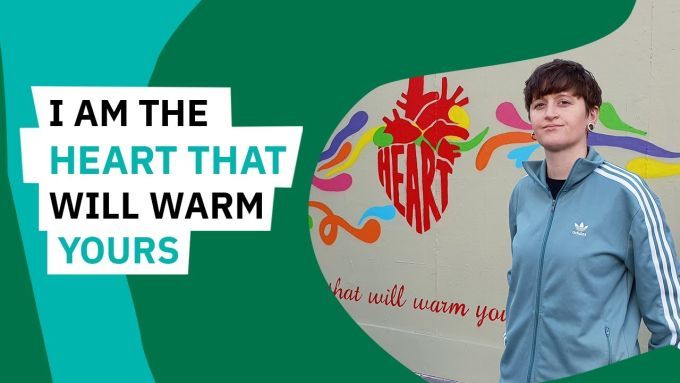 If you visit the mural on North Brunswick Street, you will see that a QR code is incorporated into the artwork. This QR code will bring you to a webpage encouraging you to sign Concern’s Nothing Kills Like Hunger open letter.

For decades, it looked likely that the fight to end global hunger could be won. But global hunger levels are on the rise again, and conflict remains the single biggest driver of hunger around the world.

In conflict zones around the world, hunger is being weaponised by armed groups, who deliberately destroy crops and livestock, and deny food access to civilians. Children living in regions experiencing conflict are more likely to die as a result of hunger and disease than fighting.

Without urgent global action, 44 million people are now at risk of dying of starvation this year - that’s almost eight times the population of Ireland. This figure doesn’t even take into account the crisis unfolding in Ukraine. Massive displacement, conflict in cities, and attacks on food markets and farmlands are dramatically affecting food security, and the crisis will also have a global effect on some of the world’s most vulnerable countries due to soaring wheat, corn and cooking oil prices and plummeting supplies.

We are asking our supporters to sign our open letter calling on UN Security Council members to guarantee emergency food for people living in conflict, and to stop hunger being used as a weapon of war.

The current conflict is having devastating effects much further afield.
Story
12 April 2022

The Horn of Africa is currently experiencing a deepening water and food crisis.
Story
16 March 2022

The global ramifications of the conflict in Ukraine have unfolded rapidly and will continue each day that the war continues, but perhaps the most immediate impact of the war, outside of Ukraine itself, is on the world’s food security.

The current conflict is having devastating effects much further afield.
Story
12 April 2022

The Horn of Africa is currently experiencing a deepening water and food crisis.
Story
16 March 2022

The global ramifications of the conflict in Ukraine have unfolded rapidly and will continue each day that the war continues, but perhaps the most immediate impact of the war, outside of Ukraine itself, is on the world’s food security.