A year at war in South Sudan

On the night of December 15, 2013, shots rang out in Juba, the capital of South Sudan. So began a civil war which continues to cause devastation in the country one year on.

It’s estimated that 10,000 people have been killed in the conflict to date.

Nearly two million people have been displaced from their homes. The war has also prevented people from planting before the rainy season, leaving no crops to harvest.

It is expected that 6.4 million people will be affected by food crisis in South Sudan in the first three months of this year.

Some 235,000 children are currently suffering from severe acute malnutrition - the gravest form of malnutrition and is life-threatening without treatment.

Concern Worldwide has been implementing emergency programmes in South Sudan since 1994.

When this conflict erupted in December 2013, we immediately met the needs of the displaced, first in Juba, and then in Bentiu, where some of the fiercest fighting continues.

In Bentiu, our team is working on a UN base where 50,000 people are seeking refuge.

Situated on land that was never intended to house people, the camp became heavily flooded during the recent rainy season.

This collapsed latrines and forced people to live knee and sometimes even waist-deep in sewage.

But with conflict continuing around the base, people have little choice but to stay. 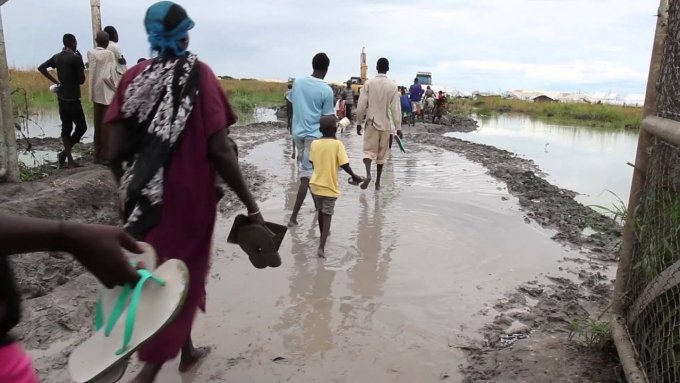 South Sudan - A Year At War

In Bentiu, we are working to deliver clean water and sanitation, treat malnourished children, and distribute emergency shelter supplies.

After the heavy flooding destroyed the latrines in the camp, we launched an interim measure to improve sanitation using “PeePoo” bags, which are self-sanitising and fully biodegradable.

We are also working to reduce flooding in the Bentiu camp by helping to dig a drainage canal and by raising the shelters of the very vulnerable.

During the dry season, our teams plan to build more robust shelters and to take other measures to prevent severe flooding when the rains return.

People wait in line to check into a general food distribution at a UN base on the outskirts of Juba, South Sudan. Photo taken by Crystal Wells/ Concern Worldwide

In Juba, which has regained relative stability in recent months, Concern is distributing food items each month to more than 15,000 people living on a UN base.

We are also treating moderately and severely malnourished children living in the camps on the UN base.

By donating, you can help to transform lives.