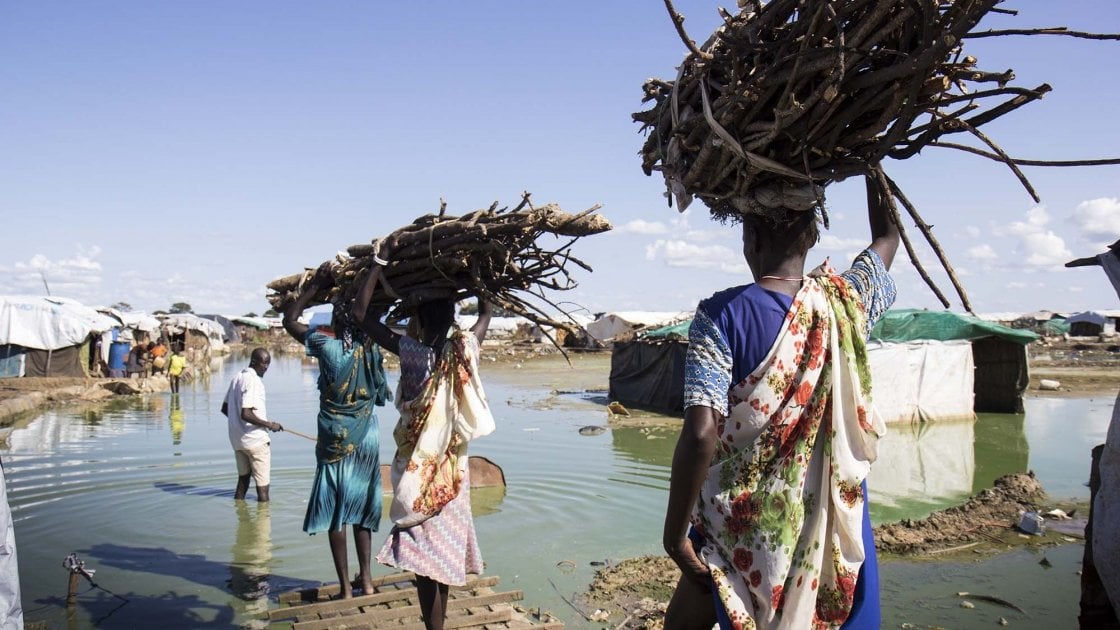 Women carry firewood back to their homes through contaminated flood water in the displacement camp on the UN base in Bentiu. Photo: Concern Worldwide.
News24 July 2015Crystal Wells

As Barack Obama visits Kenya and Ethiopia, civil war rages on next door in South Sudan. An estimated 2.2 million people have been driven from their homes as a result of the conflict, 600,000 of them to neighbouring countries, including the two Obama is visiting.

More than 4.6 million people are facing severe food insecurity and 250,000 children are severely malnourished, as markets collapsed, food prices rose, and crops went unplanted due to fighting and displacement.

Concern Worldwide has worked in South Sudan for 30 years and is providing food, water and sanitation, and treatment for malnutrition to thousands of people who fled their homes because of the war. Here are some of the stories of people we have spoken to and the conditions they have endured as a result of this war.

An estimated 166,000 people are living in camps on UN bases, which are known as “Protection of Civilian” (PoC) sites. More than 100,000 of them live on the PoC in Bentiu, the capital of oil-producing Unity State that has been a flashpoint in the country’s civil war and the site of some of the fiercest fighting. In May and June, more than 28,000 fled onto the Bentiu PoC seeking protection. Many homes were destroyed and looted, giving people no option but to leave to survive.

Last year, Bentiu PoC heavily flooded during the rainy season, collapsing latrines and leaving people to wade in often waist or knee-deep open sewage. The site is now being expanded in an effort to reduce flooding and preserve human dignity, but the fact remains that people living in the Bentiu PoC are not there because of choice, but because they fear for their lives outside the base and have little to no means to survive. 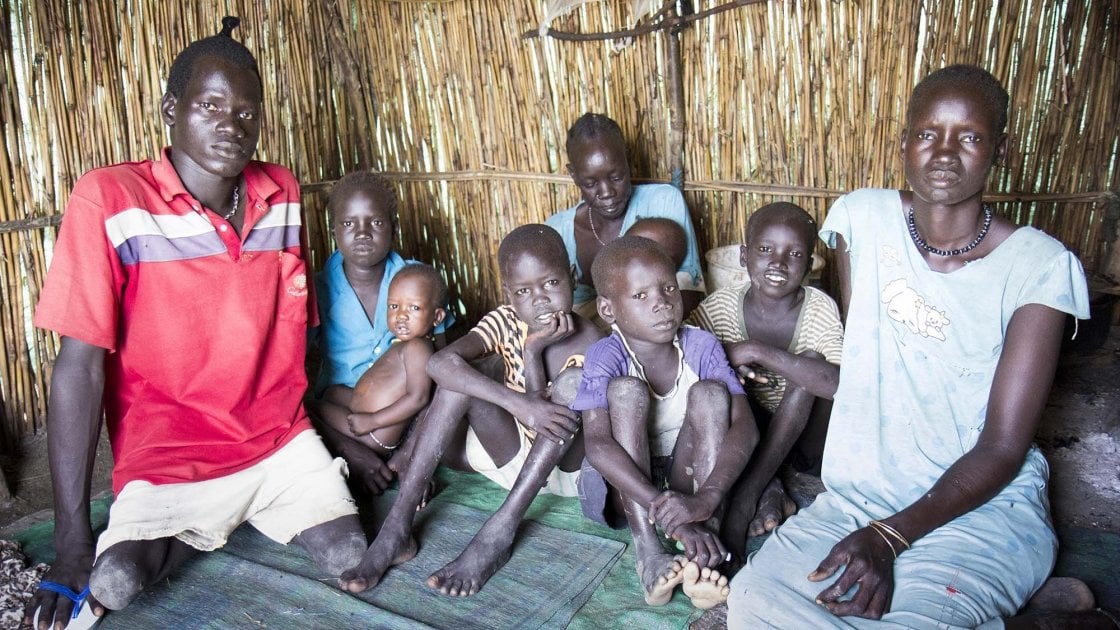 Nyadom Machar Raynem (far right), 48, James Gatchang (far left), 20, and their family sit in their shelter in the displacement camp on the UN base in Bentiu. Photo: Concern Worldwide.

When the war stops, we can go back, but with fighting and without peace, we cannot…It is very difficult to be a mother without a father. I haven’t heard from my husband since January.

When fighting erupted near their home in Unity State on 9 January 2014, they fled to the bush. Nyadom and her sister first carried James, who was born with a disability and is unable to walk, into the forest and then went back to collect their other seven children. They lived there until April 2014, when they returned to Bentiu, the state capital, but it was not long before heavy fighting erupted once again, forcing them this time to flee onto the UN base for safety. 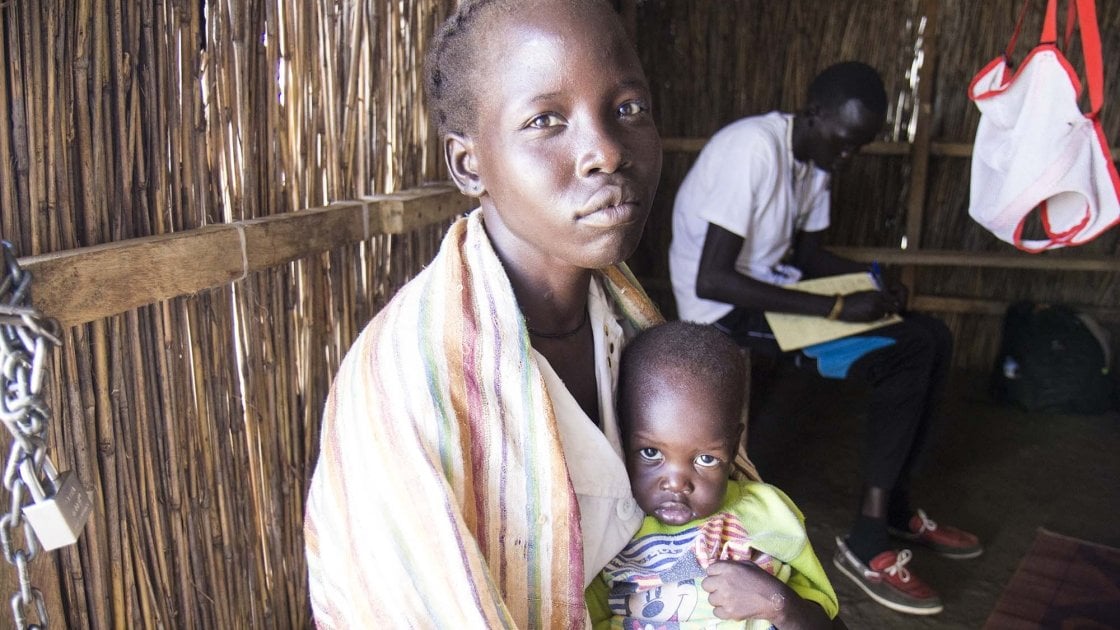 The problem of food and fighting made us come here…If there is peace, we can go back.

Two of Nyaruach’s brothers were killed when fighting reached their village. They walked for two days to Bentiu town, but the fighting soon followed them with conflict breaking out around the base sporadically. Her nephew, Taboum, is among the hundreds of children whom Concern has treated for malnutrition in Bentiu PoC. 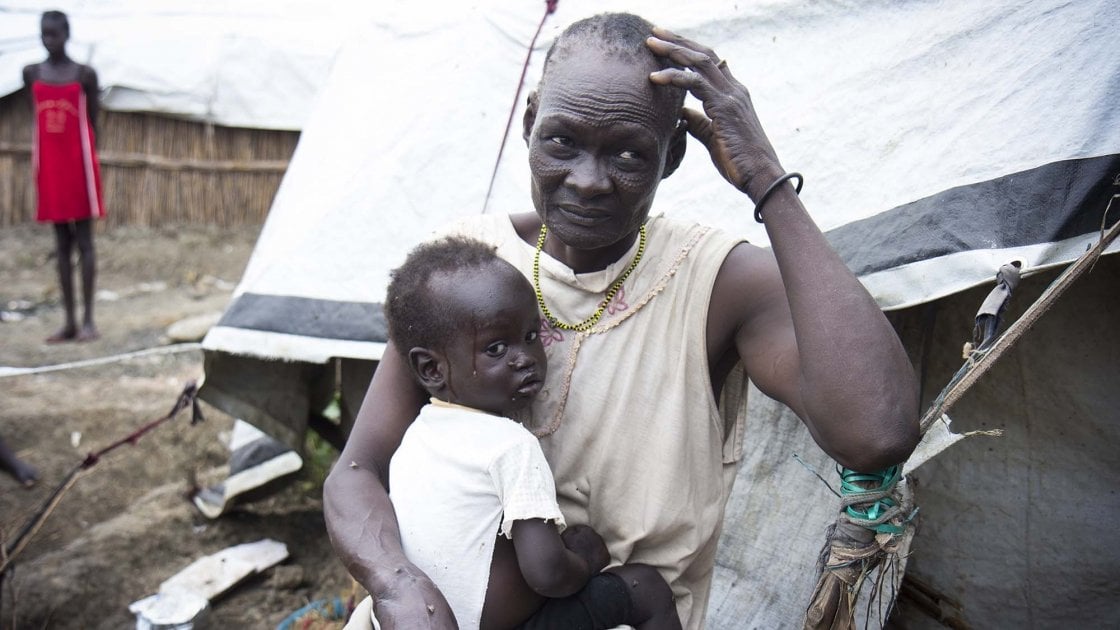 Nyalada Maluit holds her two-year-old son, Lat Machar, in front of their home in the displacement camp on the UN base in Bentiu, South Sudan. Photo: Concern Worldwide.

There was no food, no more water lilies. We came here seeking protection and food.

Nyalada Maluit was shot three times by crossfire when war descended on her small rural village of Kyergeng, just three kilometers south of Bentiu. She fled with her children 135 kilometers south to Leer, where she sought treatment at a medical clinic. The war soon followed her there. Five days later, while still healing in a hospital bed from the bullet wounds on her wrist, back, and leg, fighting sent Nyalada and her family once again running, this time deep into the bush. With no food, water, or shelter, Nyalada and her family had no choice but to survive off the land, drinking from the stream and boiling water lilies for food. 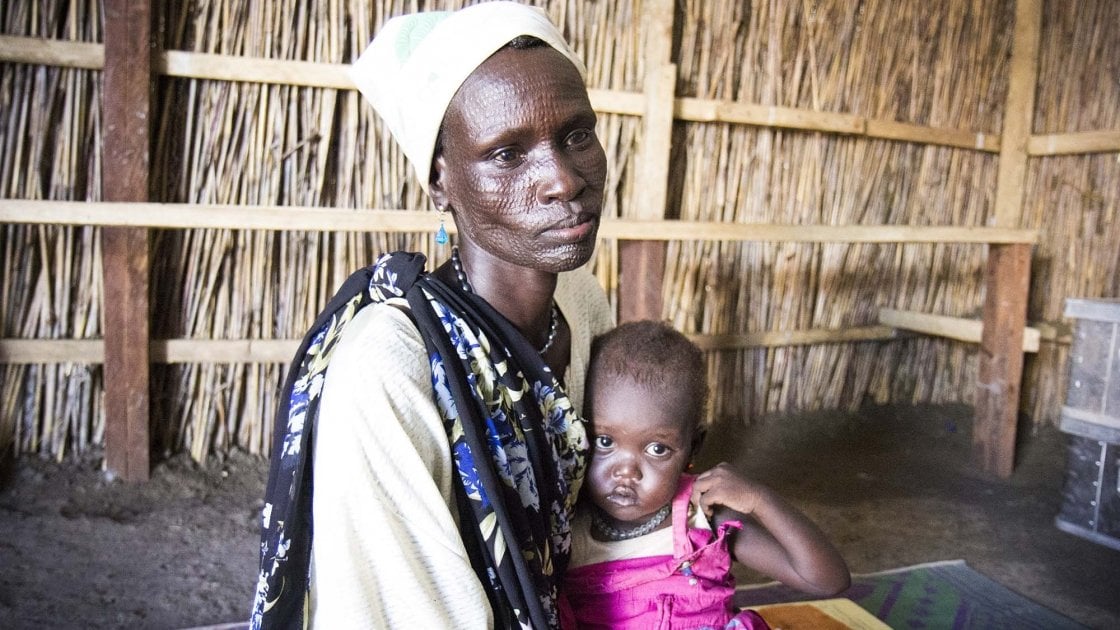 Because of insecurity, I have no access to try and bring them. I am afraid I would be captured.

Nyalam Lleu made a decision no mother would want to make. After fighting consumed their village south of Bentiu, Nyalam decided she needed to get her children to safety, but with nine children, she could not bring them all at once. She took her youngest five children with her to the UN base and left the eldest four behind. It took them four hours to walk to the base, where they saw bodies littered on the ground along the way. Clashes around Bentiu then made it impossible for her to make the journey back to her other four children.

Our teams have been on the ground in Bentiu January 2014, just weeks after the civil war first erupted. We are currently providing clean water and latrines for more than 23,000 people living in the PoC in Bentiu. We are also treating moderately and severely malnourished children, with approximately 200 children currently in our care for severe malnutrition and 3,500 for moderate. Our teams are also building new shelters for families in the Bentiu PoC, with approximately 7,000 already constructed and another 3,500 planned.

Concern is also working in the capital, Juba. We are distributing food and vouchers to displaced families and treating malnourished children in the camps and in three primary health care units. We are also continuing our long-term development work in Northern Bahr Ghazal, which has stayed relatively stable throughout the conflict. This includes improving access to treatment for malnutrition through the local health system as well as agriculture and livelihoods initiatives.