The strength and resilience displayed by women in times of conflict long predates the hashtag era and the ubiquity of social media. It’s been a constant through the ages. Over the past fifty-plus years those lucky enough to work with Concern have borne witness again and again to the bravery of women in conflict. But we really wish it was otherwise.

In the past ten days we have heard many stories and seen many images from Ukraine and neighbouring countries that echo those from other conflict-affected nations around the world, from Somalia to Afghanistan to Myanmar. 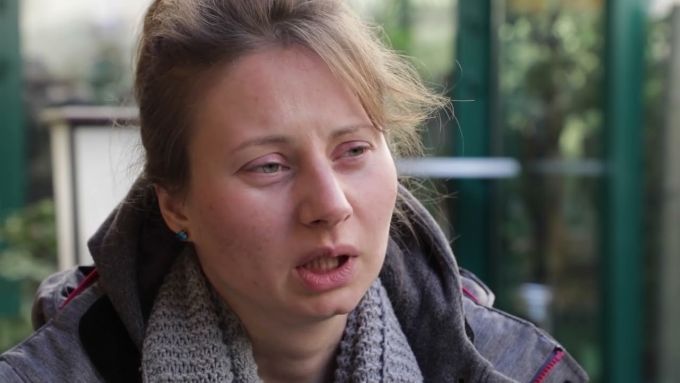 In the mountains of Slovakia, we meet a young mother refueling the family car in preparation for the next leg of her journey into exile. Inside, her two children wait patiently. She has just driven nearly 800kms from the Ukranian capital Kyiv to this border post at Ubl’a, kissed her husband goodbye, and from here they will travel onward to Germany. She is stoic about the uncertainty that lies ahead. “We will figure something out — I have children and I need to be strong for them.”

The context may change, but the story rarely varies. Whether it’s a displacement camp in South Sudan, an informal tented settlement in Lebanon, or a temporary shelter in the sands of the Sahel, women provide the bedrock of a family’s existence.

Emir* (left), his daughter Natalia*, and her daughter Victoria* (2) at Záhony train station in Hungary. They travelled from the far east of Ukraine and say they witnessed some very traumatic scenes of destruction and death. Photo: Kieran McConville/Concern Worldwide

At a train station in Hungary, we meet Natalia*, as she entertains her daughter Victoria*, who is two years old and buzzing with pent-up energy and mischief. They have been on a perilous 48-hour train journey from the heavily conflicted Donbas region in the east of Ukraine. She explains that they had just renovated their home near the city of Lysychansk and had no intention of leaving, until the bombs started to rain down all around them. “We could not stay and put this little one at risk,” she says, gesturing to the twirling toddler who was entertaining all around her in the crowded station. Beyond getting the next train to Budapest there is no plan, but Natalia carefully shields the youngster from any anxiety she may be feeling.

Almost all the evacuees from Ukraine are women and children. As they spread out across Europe, many into the waiting arms of the Ukranian diaspora, they will be forced to build a new life in a foreign land, not knowing for how long. Many who have yet to leave Ukraine will not have a support network and may well be vulnerable to predators and criminals. Safe spaces and protection programmes are vital for displaced families and Concern has long experience in providing services, dating back over five decades.

We could not stay and put this little one at risk.

In the Romanian town of Sighetu Marmatiei, right on the Ukraine border, we find Ulyana*. A gynaecologist by profession, she and her two children left their home in the Ivano-Frankivsk region when the bombing began. For now, she is going no further, having become deeply involved in co-ordinating the relief effort for those still inside Ukraine. “‘I am tired because it has been one week without sleep. More jobs, more calling, different friends call me… every day, maybe 10, maybe 20, I couldn’t account for every message.” Her lifetime of service to others continues, now under very different circumstances.

Pavlo* and Ulyana* pictured in Sighetu Marmatiei, Romania. They left Ukraine with their children when a bomb went off in their town Ivano-Frankivsk, close to the Romanian border. Photo: Gavin Douglas/Concern Worldwide

Nearby, women are climbing behind the wheels of relief trucks as they arrive from all over Europe to ferry aid into Ukraine. Because of the restriction on men coming back across the border, it has fallen to these brave women volunteers to complete the last leg of the journey into a conflicted land.

What’s happening in Ukraine is a humanitarian tragedy, and once again it has fallen upon women to carry much of the burden inflicted by conflict. As always, they have stepped up and borne that burden without question and without complaint. But wouldn’t it be great if it didn’t have to be this way?

*Names have been changed for security reasons

Your donations can help us meet the immediate needs of the Ukrainian people.
Appeal
28 February 2022

An appeal for help as the situation in Ukraine worsens.
Story
10 February 2022

What are examples of gender discrimination?

Learn more about how Concern is fighting to reduce gender discrimination in the world’s poorest countries.

Your donations can help us meet the immediate needs of the Ukrainian people.
Appeal
28 February 2022

An appeal for help as the situation in Ukraine worsens.
Story
10 February 2022

What are examples of gender discrimination?

Learn more about how Concern is fighting to reduce gender discrimination in the world’s poorest countries.