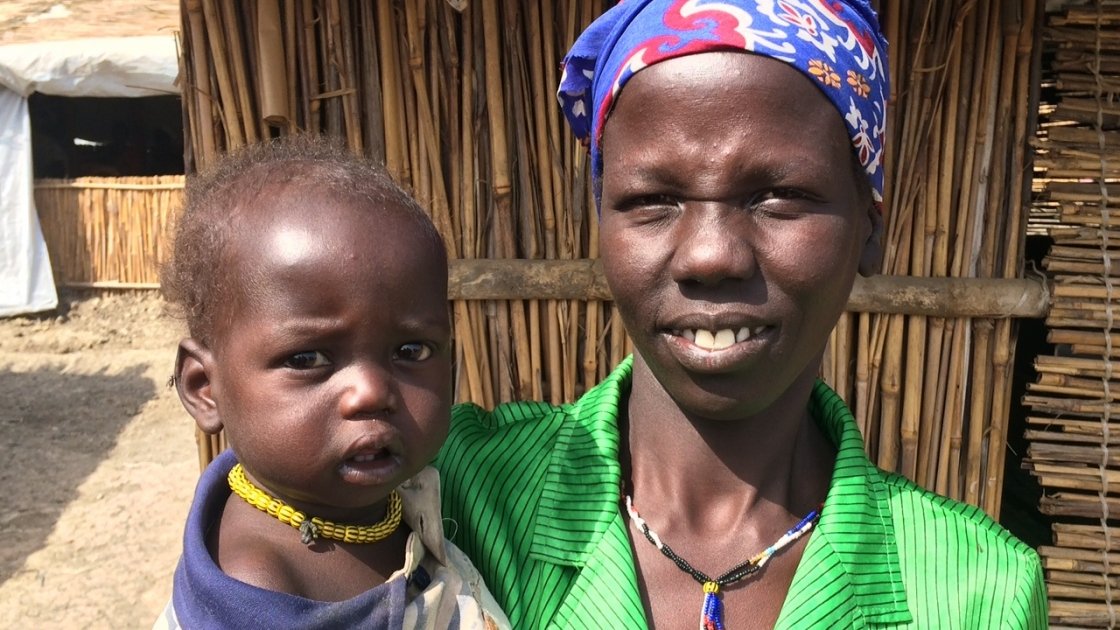 In the first of two reports from South Sudan, Concern’s Director of Communications, Sarah Martin, recalls a moving encounter with a young mother at our nutrition centre in the Bentiu camp. Her son had survived malaria aged just two months old, thanks to the diligence of the Concern team.

Nyadhial* is a diminutive figure wearing an emerald green blouse, skirt and patterned head scarf. She carries her eleven month old son, Gattuor*, on her hip. She is queuing up in the Concern nutrition centre in Bentiu’s Protection of Civilian camp waiting for her son’s nutrition checkup.

This is not Gattuor’s first encounter with our team. When he was only two months old, Concern staff treated him for malaria. Now, he is among the thousands of children here that we are monitoring for malnutrition.

Three out of every ten children in this camp are suffering from malnutrition. Concern will measure Gattuor’s upper arm to see if he is malnourished. If his upper arm measures less than 11.5 cm, he will be deemed severely malnourished and will be admitted for treatment as an outpatient.

Malnutrition in children is common in the camp. Concern uses a combination of micronutrient supplements, antibiotics, deworming medication and Vitamin A, to build up their immunity. If their mothers are malnourished they are given high protein cereal that they prepare as porridge.

Every two weeks, mothers return with their children for monitoring and to get more food supplies. Concern’s emergency nutritionist, Samuel Kopi, tells me that, on average, children are discharged in full health after eight weeks. Since its establishment here, the Concern nutrition centre has treated almost 20,000 children between the ages of zero and five. 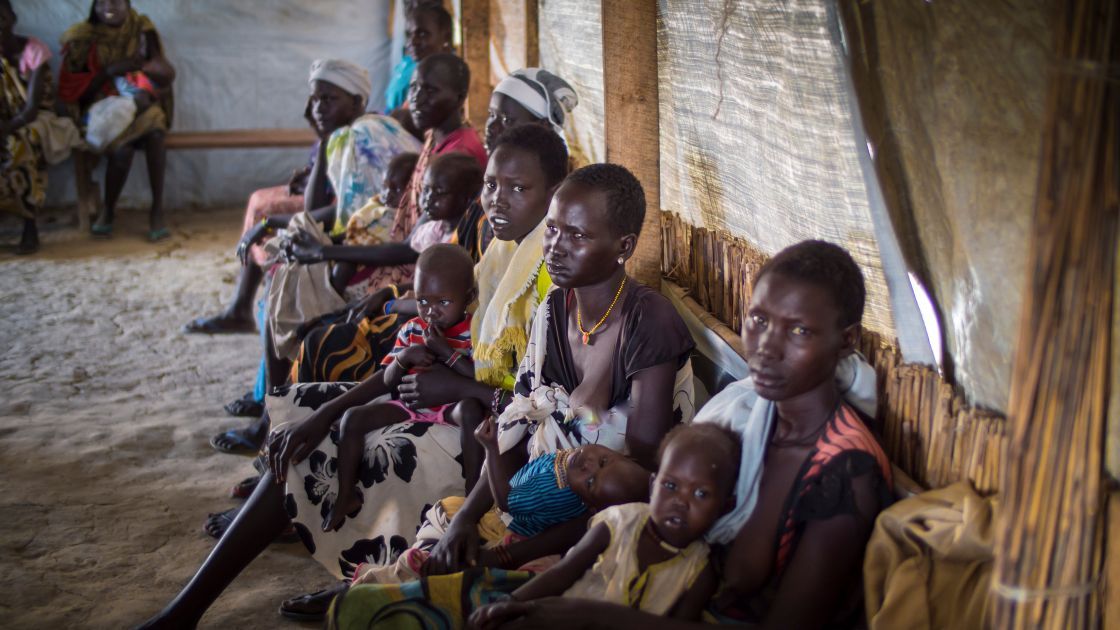 Women wait with their children for treatment at one of the Concern nutrition centres in Bentiu Protection of Civilians (POC) site in Unity State, South Sudan. Photograph taken by: Kieran McConville/Concern Worldwide.

Samuel Kopi explains that Concern supports community nutrition volunteers who monitor how the programme is going in the home. They go from house to house checking that the families are not sharing it with the malnourished child’s other siblings and ensuring that mothers bring their children for their next assessment.

After Gattuor has been seen by Concern staff, Nyadhial agrees to sit down with me for a chat. She looks weary but is happy to tell her story; so the world knows what is happening right now in South Sudan.

Before South Sudan gained independence, Nyadhial lived in the Sudanese capital Khartoum with her husband and children. Back then, her husband would go out to the countryside around Khartoum and collect charcoal that he sold in the market. Meanwhile, Nyadhial would collect firewood to sell.

When South Sudan became independent they moved to a city in the new state to be closer to Nyadhial’s family. But then the fighting came.

Nyadhial describes to me how she saw dead bodies littering the roads as they travelled up and down the country seeking safety.

Her eyes well up and she starts to cry as she tells me that her father, her two brothers and two of her in-laws were killed in the fighting.

Last May, she made the difficult journey to Bentiu Protection of Civilian camp with her husband and their four children.

Not long after she arrived, Nyadhial took Gattuor to the Concern nutrition centre. Concern staff immediately recognised that the two month old was seriously ill with malaria. He was referred by Concern for medical attention. Nyadhial feared for his life but thanks to prompt medical care, he made a full recovery.

Fears for the future

At the end of our chat I ask Nyadhial if there is anything else she wants to tell me.  She says:

I want to thank Concern for saving my son’s life.

Some 680,000 children in South Sudan are acutely malnourished, 230,000 of them severely. Your support can provide sachets of ready-to-eat, emergency food to children in danger of starvation.