Millions of people across Kenya, Somalia and Ethiopia are facing extreme hunger as the Horn of Africa endures its worst drought since 1981.

Concern is currently working to help as many people as possible in the region, which has experienced three consecutive years without rain, seen crops destroyed and livestock perish due to a lack of water.

In Kenya, a drought emergency has been declared with between 80% and 90% of reservoirs and dams drying up in Turkana, its largest county in the northwest of the country.

More than 1.4 million animals are believed to have died in Kenya alone as a result of the ongoing drought, with the government bringing in and slaughtering more than 75,000 weak livestock in order to share meat with more than 766,000 households in the worst affected areas.

Arshad Muhammad, Concern’s Kenya Country Director, explains that food and water prices are soaring to unaffordable levels and herders are often trekking up to 30km just to find a water source.

“We are suffering the consequences of changed weather patterns caused, most believe, by climate change,” he says.

“Vulnerable families are at risk of starvation and the most affected are children aged under-five, the elderly and breastfeeding mothers.

“It’s very worrying when even camels, known for their ability to survive in extremely hot and dry conditions, are struggling to survive.”

Concern is currently treating people showing signs of malnutrition in Northern Kenya and is also providing cash to families so they can buy food, while our teams are also repairing broken boreholes and shallow wells and vaccinating livestock against diseases in an attempt to keep them alive during the drought.

“Where drought leads, hunger is never far behind”

In Somalia - ranked in last place on the 2021 Global Hunger Index, an annual report from Concern and Welthungerhilfe that measures and tracks hunger at global, regional and national levels - there has not been a rainy season in two years.

The United Nations estimates that more than 2.3 million people are already suffering with serious water, food and pasture shortages, while the Somali government declared a state of emergency in November 2021 and called on the international community to come to the country’s aid.

“Water shortages are affecting huge parts of the country with an estimated 270,000 people displaced since December alone.

Women and children collect water from a water point in Horrigutha, near by North Horr town in Marasbit on 21/12/21. Photo: Ed Ram / Concern Worldwide.

“Our response includes water trucking, emergency cash distributions and increasing the number of mobile medical teams we are operating in the most affected areas.”

A recent news report from Sky News showed the scale of the devastation in the region. 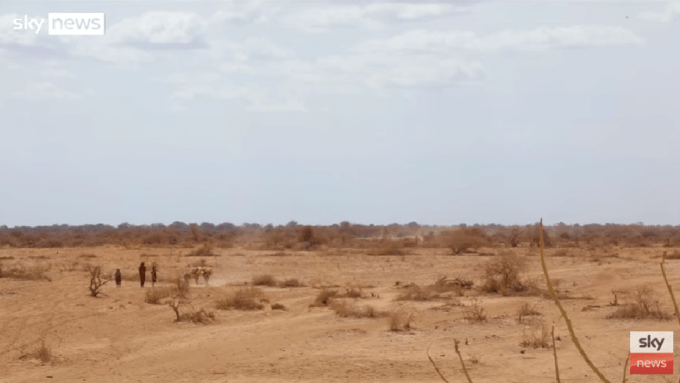 Finally, in Ethiopia, more than 6.8 million people are believed to be affected by the drought and fears are growing that if a fourth consecutive rainy season fails in March and April, the crisis will become even more drastic.

Amina Abdulla, Concern’s Regional Director in the Horn of Africa, believes relief efforts need to be scaled up in order to avoid further catastrophe. As things stand, more than 5.5 million children are expected to face acute malnourishment across the three countries as a result of the drought.

“The response across the region so far currently does not reflect the scale required to address the crisis and prevent loss of lives.

“We have in the past prevented crises like these from escalating to the point where people die from hunger and we can do this again.”

Concern Worldwide is  urging the Irish public to add their voice to its campaign calling on global leaders to tackle the leading cause of hunger in the world – conflict.

Concern’s has warned that international donors must urgently provide funding to enable humanitarian organisations to scale up their response in Somalia to prevent the current drought from deteriorating into a famine.

Concern Worldwide is  urging the Irish public to add their voice to its campaign calling on global leaders to tackle the leading cause of hunger in the world – conflict.

Concern’s has warned that international donors must urgently provide funding to enable humanitarian organisations to scale up their response in Somalia to prevent the current drought from deteriorating into a famine.