Ongoing conflict in South Sudan has had a domino effect on the nation's health. Here, David Traynor, Concern's Programme Quality Coordinator explains what is being done to remedy this, with support from the European Civil Protection and Humanitarian Aid Operations.

One of our beneficiaries, Theresa Abuk Dut, with her three sons outside their newly-constructed household latrine. Photo: Michael Mulpeter

Conflict: The cause of malnutrition

South Sudan faces chronically high malnutrition rates due to a conflict the country has faced since 2013. It has disrupted food production, leading to high levels of illness among the population and widespread poor hygiene, health and nutrition practices.

Much of the country remains in what the Famine Early Warning Systems Network (FEWSNET) classifies as 'Crisis and Emergency' levels of food insecurity. While also contending with the impacts of conflict, South Sudan faces more erratic weather patterns, resulting in prolonged drought periods or late rains disrupting the normal agricultural seasons.

The former Northern Bahr el Ghazal (NBeG) State is no exception. Despite having escaped much of the direct impacts of the conflict, NBeG has faced unacceptably high rates of malnutrition. In 2016, people said that it was “worse than the hunger in 1988” during the civil war with northern Sudan. 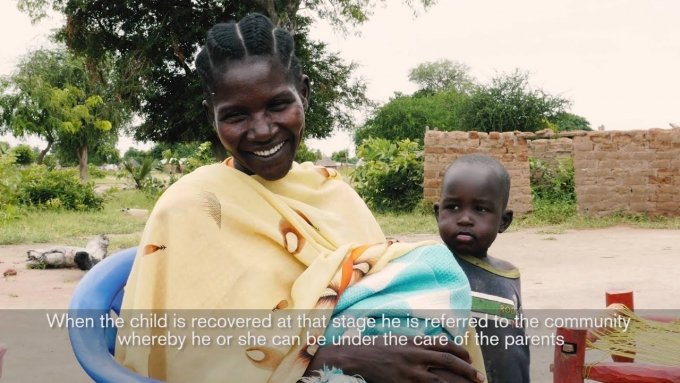 Global Acute Malnutrition rates for children under five are as high as 32%, according to the Food Security and Nutrition Monitoring System of the South Sudanese government and international bodies such as FAO and WFP. A recent survey conducted by Concern  found the rates above emergency thresholds of 15% in the two worst affected counties in NBeG.

In Aweil West, the rate was 17.1% and Aweil North reached 28.2%. The high malnutrition rates in both counties are driven by poor nutrition behaviours, with children under five having poor diets and limited exclusive breastfeeding.

Children suffer frequently from illnesses such as malaria and diarrhoea, which then results in malnutrition and high levels of infection, further compounded by poor hygiene and sanitation practices. Other findings shows that only 30% of households knew the three critical times to wash hands and only 2.5% had a functional hand washing station.

Concern first began operations in NBeG in 1998 and has since moved into long-term recovery and resilience building programmes. Concern also responds to the needs of conflict-affected and vulnerable populations in the former Unity State and in Juba, Central Equatoria State.

While NBeG remains fragile, it is relatively stable compared to other parts of South Sudan. However, the continuing high levels of malnutrition requires Concern to implement emergency responses to save lives and prevent malnutrition rates from increasing.

Last year, with support from ECHO, Concern implemented an emergency programme with the aim of providing treatment to children under five-years-old and pregnant and lactating women with acute malnutrition. This programme also assists  in prevent malnutrition through Infant and Young Child Feeding (IYCF) education to caregivers.

In total, 49 health facilities were supported across Aweil West and Aweil North. Children, along with pregnant and lactating women who have Moderate Acute Malnutrition (MAM) were treated in the Targeted Supplementary Feeding Programme (TSFP).

Young children with Severe Acute Malnutrition (SAM) were treated in the Outpatient Treatment Programme (OTP). Children with SAM and medical complications were treated as inpatients in Concern Stabilisation Centres. The programme was also supported by other donors, including Irish Aid and OFDA, with support of both funding and donations in-kind from UNICEF and WFP.

Despite having treatment services available, many caregivers do not know the symptoms of malnutrition.

In many instances, the early stages of malnutrition are not identified on time and children then develop complications. In response to this challenge, Concern empowered the local community to be able to manage malnutrition through the Community-based Management of Acute Malnutrition (CMAM) approach.

Mary Nyandit and Mol Garang, both volunteers in their communities, understand the importance of getting malnourished children to the health facility for treatment. They were selected by their communities and trained on their roles as CNVs.

The training, as they explained, involves knowing how to screen for malnutrition using the Mid Upper Arm Circumference or MUAC strips and being able to teach mothers the causes of malnutrition. Mary described how the erratic climate and problems with food affect malnutrition and how the chronic food insecurity situation impacts on malnutrition.

People do not have anything to eat. Some people sleep without eating. I visited homes, they had no food and they are sick. When I see their gardens, they have food but problems are insects. They planted late. "

However, lack of food is not the main reason for malnutrition. Having recently come from a refresher training, Mol says:

We were trained last week on the symptoms of SAM, MAM and MUAC. We see that there is a decreasing malnutrition and fewer children with diarrhoea."

Mary and Mol explain how illness drives malnutrition rates up. As it was dry season, there was less contaminated water around and thus fewer children with diarrhoea.

Advice and support to new mothers

With the recent arrival of the rainy season, the numbers of mosquitoes increases and with it, the prevalence of malaria. Increased illness means increased malnutrition. Mary and Mol say that they need to teach mothers to put children under mosquito nets.

When they do their screenings, they go from house to house, measuring MUAC using the strips. If the child’s MUAC is red, then that indicates the child has SAM, while yellow means MAM and green means the child is healthy.

Then the mother is provided with a referral slip and is sent to either TSFP or OTP. Mary points out the main ways mothers can prevent malnutrition in the first six months after birth.

No drinking water after birth and ensure good cleaning and hand washing.

This is part of Concern’s supported IYCF education, mothers learn how to prevent malnutrition from lead mothers in the community who were trained by Concern.

Mark Garang is another CNV who has also been trained by Concern to screen for malnutrition and educate his community on the importance preventing malnutrition.

It is important to support communities to dig and build latrines, because now they just use the bush."

Mark identifies that a lack of sanitation means that children get ill and then become malnourished and describes how one mother he referred to the health facility had a child with diarrhoea.

The child was so ill, that he developed SAM with medical complications and had to be treated in the hospital in Aweil town.

This case, highlighted by Mark, illustrates why it is important to reduce easily-preventable diseases such as diarrhoea and refer children early to the health facility for treatment of malnutrition.