A total of 20 million people in east Africa are now at risk of starvation. Famine has been declared in South Sudan and is increasingly likely in Somalia; both Kenya and Ethiopia are experiencing severe food shortages. Concern teams are on the ground in all four countries delivering critical emergency support.

Somalia on the brink

Speaking from his office in Mogadishu, Abdi-Rashid Haji Nur, our country director in Somalia, underlined the gravity of the situation there. He noted, “We have a drought in Somalia which is likely to bring us to a famine situation if not supported urgently … Over one million children are already malnourished.” 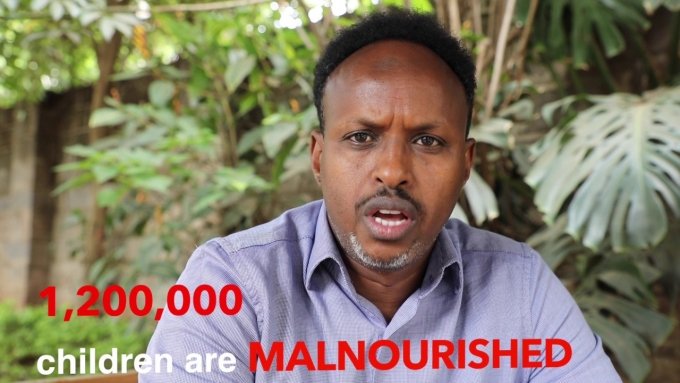 In Somalia, famine is not inevitable if action is taken but the risk is very real and time is running out. Abdi-Rashid pleaded for urgent support from the international community:

To our friends throughout the world, it’s time, it’s now. We are running against time and we need your support … Please donate to Concern today so we can save lives together.

Conflict has been a powerful driver of the crisis in both Somalia and South Sudan. Feargal O’Connell, Concern’s regional director for the Horn of Africa, spent the last number of years in South Sudan, where he witnessed this crisis deepen. Speaking to media outlet Aljazeera last week, he noted:

“In South Sudan, conflict causing displacement as well as political and economic crisis have created a ‘perfect storm’ which have resulted in the famine that has now been declared in two counties.”

Feargal has warned of the disastrous implications if the world fails to act now:

A lack of action could result in thousands of innocent women, children and men dying because of hunger and this must not be allowed to happen. In this grave situation, the international community has no option but to dig deep and do everything we can to respond.

Food shortage in Kenya and Ethiopia

In both Kenya and Ethiopia, drought has been a primary driver of the crisis. Ethiopia is still recovering from last year’s drought – driven largely by El Niño – and more than 10 million Ethiopians now require food assistance. In Kenya, the drought was declared as a national disaster in February and currently over 350,000 children and pregnant and lactating mothers are acutely malnourished.

Concern has an ongoing presence and deep knowledge of all four countries now in crisis. Our teams have been working with communities in Ethiopia for over 40 years and with those in Somalia, South Sudan and Kenya for 30 years, 19 years and 15 years respectively.

As the crises deepen, our teams are on the ground delivering critical emergency support. A large part of our work right now involves urgently treating the growing number of severely malnourished children. We are also delivering cash transfers, distributing food and providing access to clean water to tackle the growing threat of disease to vulnerable populations.

With your support, we can reach more people as a matter of urgency to prevent this crisis from escalating. Donate now to support vulnerable communities facing starvation in east Africa.

Help those affected by the conflict in Ukraine