Despite a famine declaration being recently lifted, the food crisis in South Sudan is affecting more people than ever with the number of people facing the risk of starvation rising by an average of 9,200 a day. As the world’s youngest country approaches its sixth year of independence, we shed light on a nation falling deeper into a devastating food crisis. 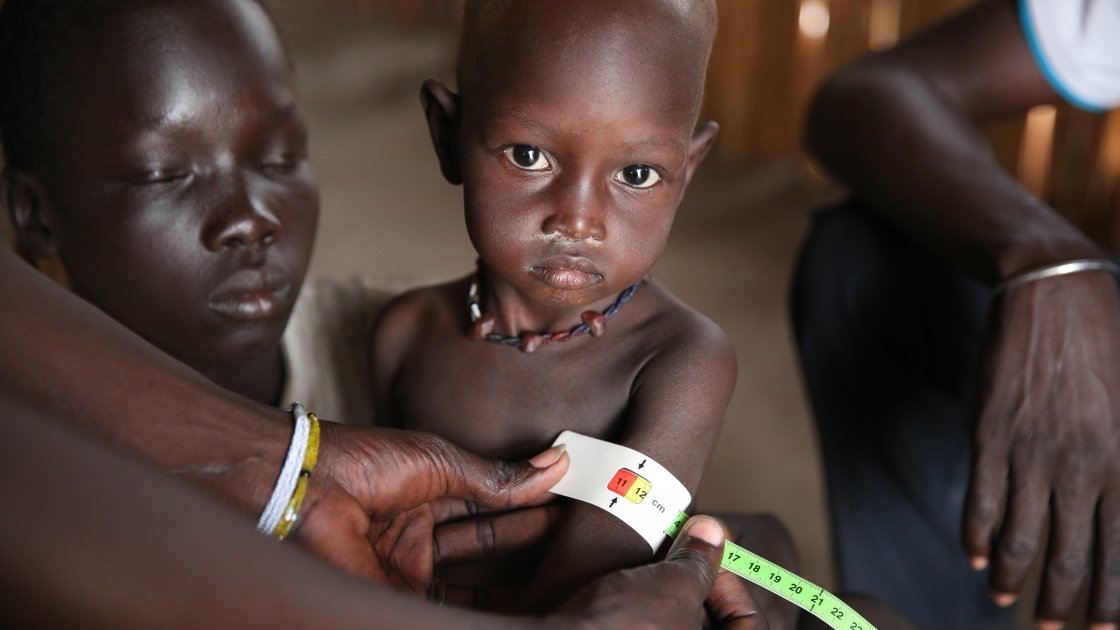 No more famine, but hunger is on the rise

According to the most recent Integrated Food Security Phase Classification (IPC) report, famine is no longer present in the two areas originally affected in South Sudan, however with extreme levels of hunger rising for an average of 9,200 people per day, the numbers tells a more complicated story.

Despite the declaration of famine being officially lifted in recent weeks in Leer and Mayendit counties, the overall situation in South Sudan is dire. Concern’s Country Director in South Sudan, Fiona McLysaght, said:

"The headline that famine has been declared over is only part of the story. The situation remains stark”, adding, “We cannot let South Sudan slip off the world’s radar." 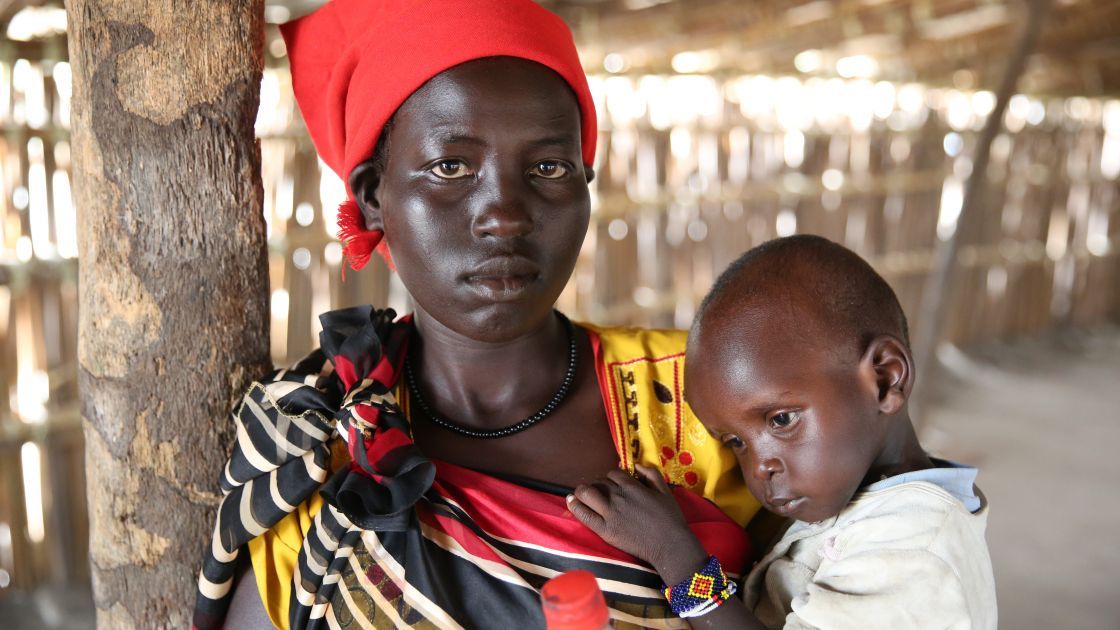 The situation in the world’s youngest country, which gained independence six years ago this Sunday, is unprecedented. The food crisis is worsening with over six million people now struggling to find enough food to survive as they flee from conflict. That is the highest number ever recorded for South Sudan.

While the end of famine is due in large part to increases in food aid and a swift humanitarian response from agencies like Concern, it’s also likely that many people migrated to areas where it was easier to access assistance. This has had the effect of dispersing the levels of need, rather than truly alleviating them.

Much of the population living in South Sudan’s Unity and Greater Jonglei states continues to face crisis and emergency levels of hunger and some 45,000 people are experiencing catastrophic conditions. 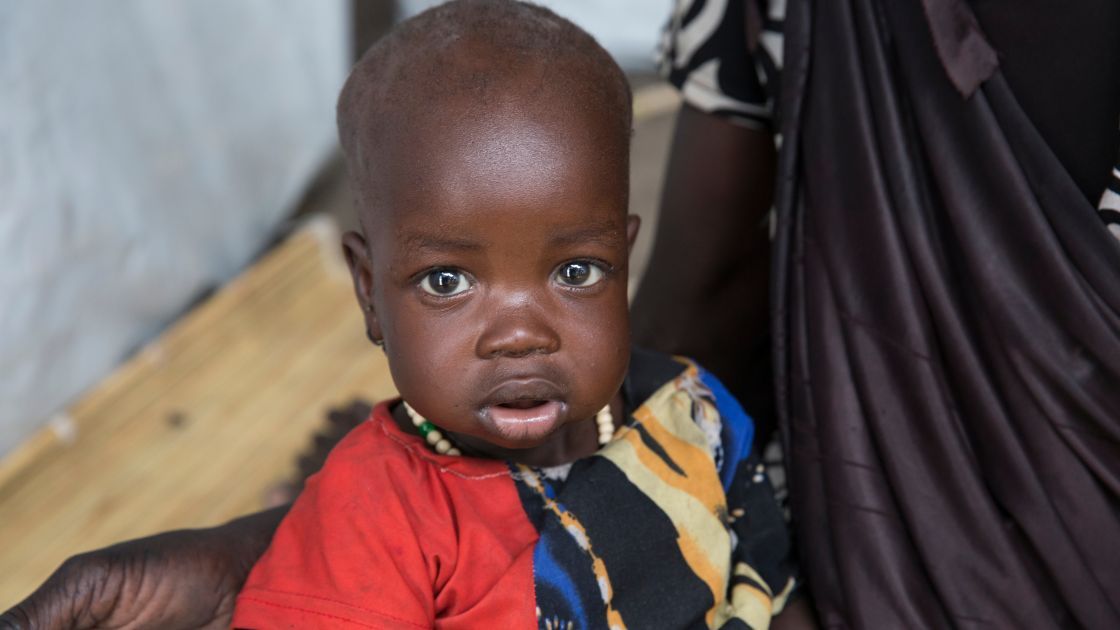 One year old Bashiir* is among those availing of nutrition services from Concern and Nile Hope in Unity, South Sudan. Photo: Kieran McConville/Concern Worldwide. *name changed for security reasons.

The devastating food crisis is largely the result of the country’s ongoing conflict, which has killed tens of thousands of people, destroyed the economy, and forced more than 3.5 million to flee their homes. As the conflict rages on, more areas are becoming inaccessible and the humanitarian situation is worsening. Fiona McLysaght warns, “If the war continues, the food and nutrition situation is likely to deteriorate further.”

Remarking on the gravity of the situation, Concern’s Regional Director for the Horn of Africa, Carol Morgan, said: “We urgently need a ceasefire and a lasting peace so that we can get safe access to the millions of people who desperately need assistance.”

“In 2011, after a referendum, the world applauded South Sudan for gaining independence after decades of war, but six years on the youngest member of our global family is in crisis and needs our help.” 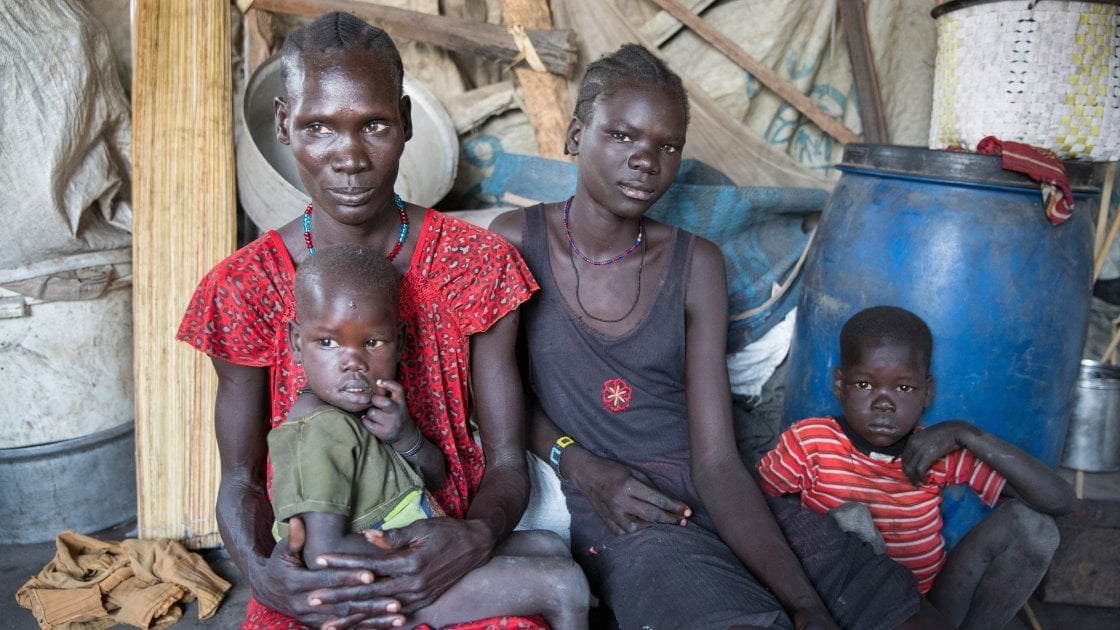 37 year old *Sahra, with two of her five children, outside their temporary shelter in the swamps of Unity State, South Sudan. She came here to flee fighting in her home town. Photo: Concern Worldwide.

What Concern is doing

As the crisis persists in South Sudan and others areas of East Africa, we are continuing to respond. We currently have just under 350 staff in South Sudan, spread across Unity state, Northern Bahr el Ghazal, and Juba, providing emergency nutrition for the severely malnourished and distributing food. Concern also provides, shelter, clean water and latrines, and offers programmes that help improve health and nutrition.

Your help is needed

We’re reaching over 400,000 people however we need your support to reach the millions of people struggling to find enough food to survive.