Struggling for survival in the swamps of South Sudan 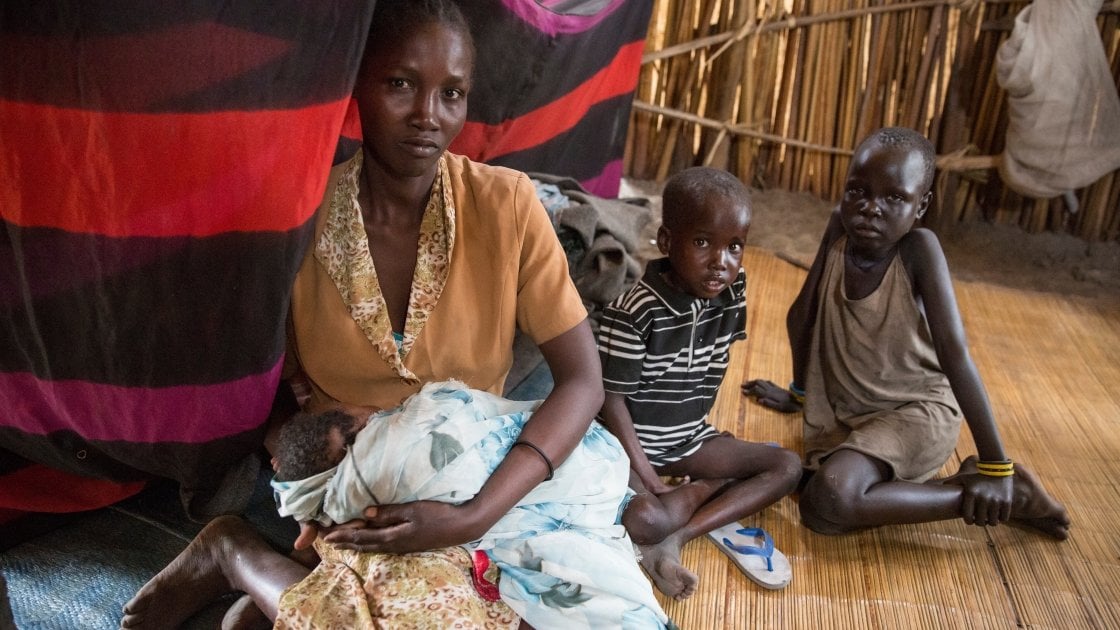 Nadia with three of her children on the island of Touch Riak where they have sought refuge from violence. South Sudan, March 2017. Photo: Kieran McConville, Concern Worldwide.
News24 March 2017Clare Ahern

The people of Leer County are amongst those worst affected by South Sudan’s food crisis. Conflict has forced many to flee their homes. People are surviving on whatever they can forage from the swamps where they have sought refuge. Their county is one of two in which famine has been declared.

It’s the middle of the day in a village in Leer County, a village which once thrived and is now very nearly deserted. Its people were forced to flee when fighting started in the region last July, many seeking refuge on nearby islands in the swamps of Unity State.

Concern’s local partner, Nile Hope, previously had a compound here. Now, everything — including the trees — has been burned to the ground. Little remains, except a borehole that still proudly pumps clean water. 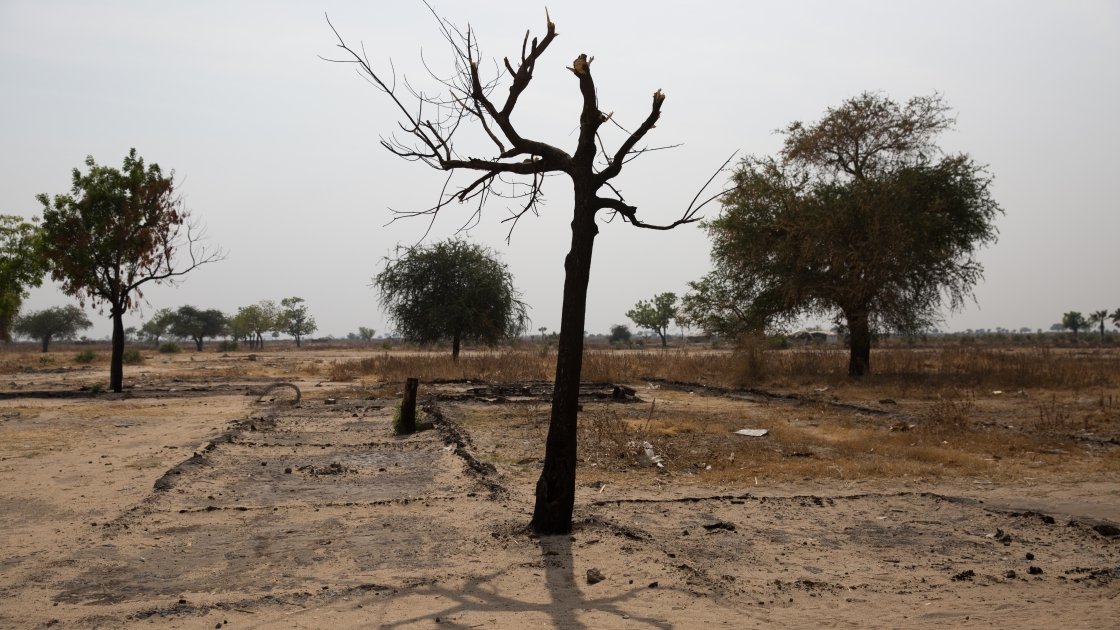 All that remains of Nile Hope’s compound that was burnt to the ground during a raid by soldiers in a Leer County village last year. South Sudan, March 2017. Photo: Kieran McConville, Concern Worldwide

A group of 20 men are gathered in the village. They tell us that people have slowly started to trickle back, six months after fighting drove them out. One man, Mustafa* points to a charred piece of land and states “That was my home”. Before the fighting, he was a farmer. Now he has nothing. He hopes that the fighting will stop but he feels powerless.

We are all very worried. Houses are burned. Properties have been looted. We have so many problems. Even now, we don’t know if we can plan and cultivate. We have no hope."

The islands of Leer County are both inhospitable and inaccessible.  They offer refuge from the violence, but reaching them with aid is also a huge challenge. Our team have to travel 24 hours by canoe in order to reach some of the more remote locations. 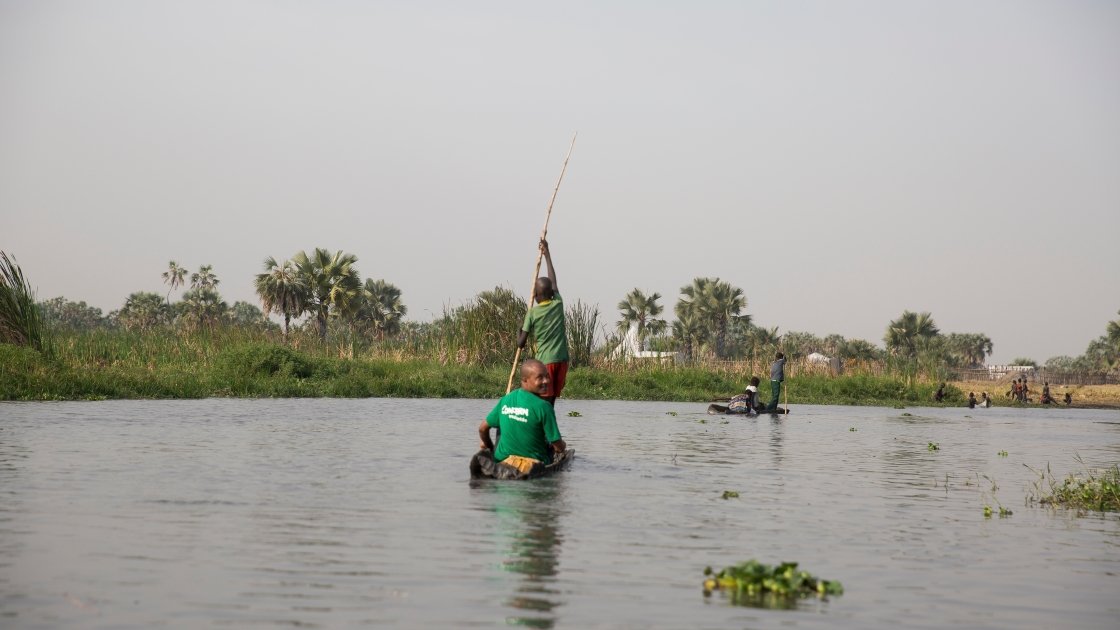 “We eat only once a day, sometimes twice if we are lucky”

Nadia* is one of the thousands of people still hiding out in the islands. She is living in a church with her husband and four children, along with many other families.

She explains that soldiers would attack a town, and then leave, possibly returning later, forcing communities to abandon their homes. When she ventured out of hiding to return to her town, she found her home burned to the ground. All of her belongings – including her food – were gone. What’s more, the soldiers hadn’t left. 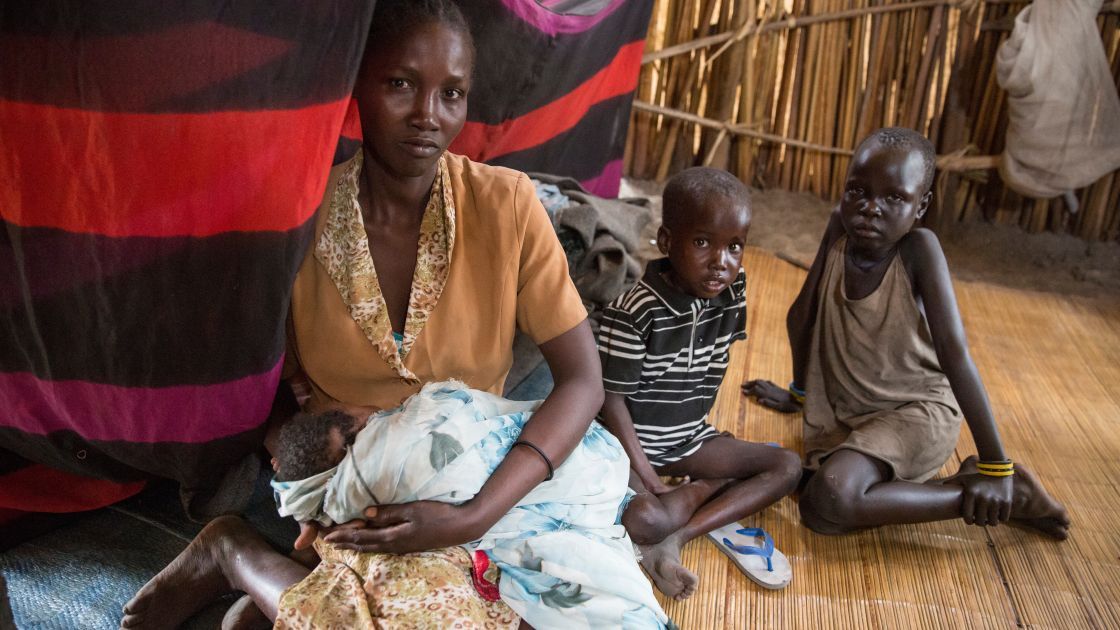 Nadia* with three of her children on the island of Touch Riak where they have sought refuge from violence. South Sudan, March 2017. Photo: Kieran McConville, Concern Worldwide.

Having fled their attackers once again, Nadia and her family now live in relative safety. But they struggle to eat. Like so many others they are reliant on aid, or whatever they can forage from the swamps.

We wait for food from the distributions. But if we have no food we eat water lilies, or fish, or fruit from the nearby trees. We eat only once a day, but sometimes twice if we are lucky."

Before the war, hunger was never an issue for Nadia’s family. Today, her son Bilal* is suffering from malnutrition. Thankfully he is receiving emergency therapeutic food and regular check-ups from a Concern supported clinic.

Based on source materials by Kristin Myers

*Names have been changed to protect identities

How Concern is helping

In the midst of famine and conflict, the people of Leer County are living under the threat of starvation. Along with our partner, Nile Hope, we are delivering emergency nutrition support to malnourished children.

Across East Africa, the worst drought in decades has left millions of people like Mustafa and Nadia without enough food to eat. They urgently need our support. Please give what you can today.