Natasha fled Kharkiv with her son Ivan immediately after the first bombs fell. They arrived in Morshyn, western Ukraine, three days after the Russian invasion.

“By the time we left Kholodna Hora, it was already under fire," Natasha tells us.

"At the same time, people were quietly walking to buy some bread. I mean, a lot of people still hope that everything is going to be okay, I called the taxi. The taxi driver said that he took his family out of the town, and he continued working. I asked: 'Why do you not leave?' He said, 'Who, if not us?'”

“I realized that wars do not end quickly. So, I have accepted my company’s offer to relocate, and I have come here by bus,” Natasha states, adding that they crossed many checkpoints and passport controls on the way.

“It breaks my heart to realise how many of my friends are staying there.”

Natasha and Ivan got to Lviv in western Ukraine and began looking for a place to stay. Finally, they found a place in an old sanatorium in Morshyn.

This building was recently re-opened for people who are fleeing the war. Natasha needs to carefully consider her next moves, noting, "I am not going anywhere right now. Only if the bombs will fall, I would leave."

Although her son Ivan is highly adaptable, Natasha is concerned about him. “He is fine, but I think he is traumatized. In any case, it could reveal later on,” she concludes.

"We wanted to take our children to a safer place"

Collection centers in an old sanatorium where mostly mothers and children fled from conflict zones in other parts of Ukraine. Photo: People in Need.

After the time spent in the basement, fear, and concerns for her family's safety, Svitlana decided to flee. She fled with her daughter Nastia (24-years-old), granddaughter Maia (1-year-old) and several other mothers with children who were afraid to stay home due to the intensive fighting in the area.

The women took the train from Zaporizhzhia to Lviv, which took 30 hours. Svitlana informs us that the journey “was terribly cold in the train. When we entered, there was no heating. But on the way, it was already warmer. The train was very slow on the way; besides, we stopped every time when the sirens were heard.

“The train was full of mothers and children, some of them were crying. Nobody wanted to leave our city, our husbands, fathers, brothers, relatives and friends. But we wanted to take our children to a safer place. We were scared. But we’ll come back home because we’ll win this war."

After thirty hours on the train, Svitlana and the other women and children went to the sanatorium in Opaka.

They covered more than one hundred kilometres by bus and were utterly exhausted by the very long and complicated journey.

“When we arrived, we were happy that it is calm here. Despite the fact that there is no heating, we are happy. It is a beautiful landscape. It’s very nice here. But we desperately want to go back home,” she noted wearily. 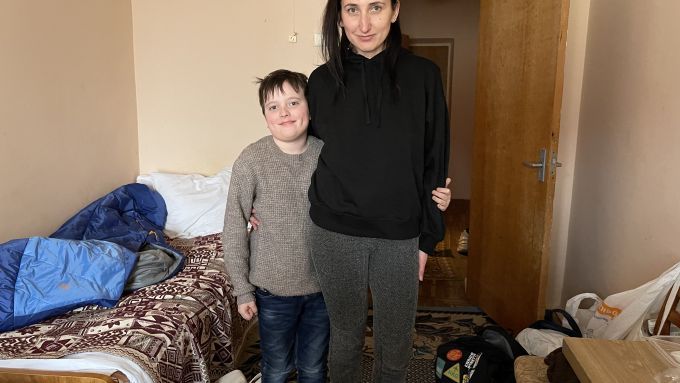 Natalia, who fled Kharkiv during the crisis

“We’ve spent several days in the bomb shelter with my six years old daughter. It was terrible there. There were other mothers with children, and some of them got sick as it was cold and wet in the shelter. And we decided to leave to Lviv, jointly with other women and children as it is much easier to go together,” says Iryna, a 30-year-old from Zaporizhzhia.

Like many innocent civilians seeking safety in Lviv, she spent thirty hours on the train with two more on the bus to the Opaka sanatorium, where the families are hosted for free.

“It is very quiet here. We are not afraid as we were in Zaporizhzhia,” says Iryna.

“But anyway, we desperately want home… In the worst-case scenario, if the bombing will start here, we’ll go to Poland. But I don’t want to! I want to go home,” adds Iryna.

“We are not discussing the war with children. But they feel and understand that something very bad is happening. We don’t need anything but peace in our country so that we can go back home."

Meanwhile, at Concern Worldwide we have launched a humanitarian operation - in collaboration with People in Need and French NGO ACTED - within Ukraine to help those fleeing the conflict.

“The humanitarian need here is huge and growing daily, as more and more people arrive,” our Head of Emergency Response Ros O’Sullivan noted.

“But Concern and its partners are very well placed on the ground to respond. This response is made possible by of the generosity of the Irish people.  We urge you to support our Ukraine Crisis appeal today online at www.concern.net or by calling our emergency hotline 0818 410510.”

Help those affected by the conflict in Ukraine

A colourful mural with a poignant backstory was launched in Dublin today as part of a drive to rally public support for a campaign which calls on global leaders to end conflict-driven hunger and famine.

Ireland’s neutrality will be debated by two of the country’s top school debating teams in a final that will be broadcast live online. Galway’s Coláiste an Eachréidh debating team will debate the hot topic with Cork’s Mount Saint Michael in the final of the Concern Debates.

A colourful mural with a poignant backstory was launched in Dublin today as part of a drive to rally public support for a campaign which calls on global leaders to end conflict-driven hunger and famine.

Ireland’s neutrality will be debated by two of the country’s top school debating teams in a final that will be broadcast live online. Galway’s Coláiste an Eachréidh debating team will debate the hot topic with Cork’s Mount Saint Michael in the final of the Concern Debates.