Twenty-five years after the Rwandan genocide began, Concern's Director of International Programmes Anne O'Mahony recalls a day in the African nation that started out like any other, but ended with a moment that still fills her with pride.

It was a cool, damp July day in Ruhengeri, northwest Rwanda in 1997, and one I will never forget.

I was Country Director for Concern Worldwide, three years after the genocide and just eight months after mass repatriation, when over two million people marched over a 48-hour period back across the borders from notorious refugee camps in Democratic Republic of Congo and Tanzania.

Everywhere, survivors were searching for pieces of their former lives and you could sense and almost taste the despair and longing."

I got up early and drove for two hours, to one of our five centres for lost children. These were mostly very young children separated from their parents during the genocide and mass population movements and there were hundreds of thousands of them. Too many families were split up either by force or by accident amid the chaos.

We ran a huge operation aimed at reuniting lost children with their parents or close relatives, which involved a lot of investigate work. The most challenging were the smaller children who had little memory of their names or where they had come from. We used drawings, posters, village announcements and cross checked our data with other agencies, churches and institutions.

We also provided buses that brought parents, most of them mothers, around to these centres in the hope that they would find their lost children. They always arrived with a sense of combined expectation and despair. They had been through this in other unaccompanied children’s centres many times before.

When I arrived, our programme director, Julienne, was there waiting for the bus while the 85 children at the centre sat or played under a shelter. They often sang, but when the buses came, there was an anxious silence.

Reunifications were very rare and everyone, even the children, knew it."

Of all the children at this centre, one for me stood out. Her name was Margaret, a beautiful, tall 14-year-old girl, who was much older than the others. She had been with us for about two and half years and in all that time never said a word.

She was so deeply disturbed by whatever she saw during the genocide that she just couldn’t speak and was totally withdrawn. We never got any details from her that would help us find her family and we were running out of options and ideas.

Margaret, which was the name we gave her, was completely introverted and cut-off from the rest of the world. All she did all day was knit. She used the same piece of wool over and over again, ripping it up only to start knitting again.

We never found out what the significance of the piece of wool was, but she never let it go. It got grubbier and frailer as time went on, but she refused to use any other piece of wool. We had tried to replace it for her, but she absolutely refused and was much happier with that small grubby bundle.

The bus finally arrived at midday. Twenty five parents got off, each one greeted by Concern staff and brought to the children. They looked around slowly, more in hope than expectation. These were tense moments. Margaret always sat in the corner busily knitting during these visits. It seemed that as far as she was concerned, they had nothing to do with her.

The parents were still looking around when all of a sudden there was a movement from the back. Margaret burst out and grabbed this woman.

Margaret talked and talked. I don’t know what she said, but she was absolutely and completely overjoyed and so was everyone else. It was clear she could indeed speak and clear that she was speaking to somebody who she never thought she would see again.

There were tears of joy for Margaret on the faces of everyone in the centre. I am as elated now as I was that very day. I can still see her smile, the lit-up eyes, the pure joy and relief. I was privileged to witness that moment and it's one I am glad to share.

It turned out that Margaret's mother had been looking for her for years and had almost given up.

Today, as we mark 25 years since the Rwandan genocide, I remember Margaret and the over 6,000 other children we helped reunite with their parents.

They are now all young adults and many have completed university degrees and are in the workforce.

Rwanda has gone from strength to strength since those dark days, but I remember Margaret and her mother as shining lights and I hope they are happy still together.

This piece was originally broadcast on RTE's Sunday Miscellany on Sunday, 7 April 2019.

This video, made to commemorate the twentieth anniversary of the genocide in Rwanda, details the tragedy that occurred in 1994, and how far Rwanda has come since. 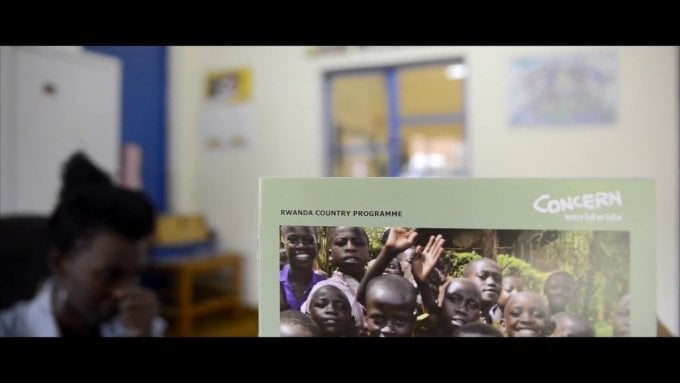 Dominic MacSorley led Concern's response to the tragedy that unfolded in Rwanda 25 years ago. He shares his recollections.
News
4 September 2018

Find out about 2 remarkable women’s experiences with Concern in Rwanda during and after the genocide, and their amazing story of survival, redemption, and hope.
News
8 April 2016

Dominic MacSorley led Concern's response to the tragedy that unfolded in Rwanda 25 years ago. He shares his recollections.
News
4 September 2018

Find out about 2 remarkable women’s experiences with Concern in Rwanda during and after the genocide, and their amazing story of survival, redemption, and hope.
News
8 April 2016