What is the world's largest refugee crisis in 2021?

Almost 80 million people worldwide have been forced to flee their homes, the majority of whom are children. In fact, an average of one person is forcibly displaced every 2 seconds — but not all displacements are the same.

According to the most recent data from the UNHCR, there are currently 79.5 million forcibly displaced people around the world. Of those…

What is the difference between a refugee, asylum seeker and IDP?

Refugee is the classification for someone who is forced to flee their country of origin due to conflict, violence, or persecution. They are unwilling or unable to return based on a demonstrable threat due to their race, religion, political stance, or social status.

Asylum-seeker is the classification for someone who is seeking international protection from danger in their country of origin, but whose claim for refugee status hasn’t been finally decided. Every refugee begins as an asylum-seeker, but not every asylum-seeker will be granted refugee status.

Internally displaced person (or IDP) is the classification for someone who is seeking refuge somewhere else within their own country as a result of conflict, epidemic, or natural disaster. Their hope is to return home as soon as it is safe to do so.

Are you up for a challenge?

STEP IN THEIR SHOES

What is a migrant?

Migrant is the classification for someone who is moving between temporary homes (within their origin country or across international borders). This is different from an immigrant, who makes the conscious decision to move and resettle in a new country. Migrants aren’t forced to leave their country of origin due to violence, but often have just as urgent needs to find a better future (often a better economic future).

According to The Office of the United Nations High Commissioner for Human Rights, there are currently 244 million people living outside their country of origin, all of whom are known collectively as 'migrants'. This term covers an extremely broad range of people and circumstances — from “expats” who relocate through their job, to families fleeing violence, to individuals seeking better economic opportunities abroad.

A refugee camp in north-west Iraq. 11,000 people have fled from Syria to this camp with an estimated 500 more people crossing the border per day. Photo: Gavin Douglas

What is the largest refugee crisis in the world?

In the past decade, the global refugee population has more than doubled. More than 26 million refugees currently live in host communities, many of which are in neighbouring countries. We are now at the highest population on record. 68% of the world’s refugee population comes from just five countries.

These are the top ten refugee crises in the world:

Many of those who have fled Burundi did so in the wake of violent political unrest that began in 2015. While security has improved over the last five years, further instability has been fueled by an economic downturn and extreme food insecurity.

Concern has operated in Burundi since 1997, focusing on livelihoods, nutrition, and health. Our community-based health and nutrition interventions focus especially on those who have been excluded from the health system.

Nearly 12% of the population of Eritrea — over 505,000 — now live as refugees due to social and political instability and violence. It’s hard to gauge humanitarian need within the small East African country — Eritrea remains one of the countries that Concern struggles to get complete data on for our annual Global Hunger Index.

Since late 2012, the people of Central African Republic have suffered bouts of sectarian violence that have displaced over 1 million people. As of December 2020, that includes over 610,000 refugees.

This escalation in violence (which has been ongoing since CAR gained independence from France in 1960) has made it increasingly dangerous for citizens to live in the country — and for humanitarian organizations to work in the country. Concern has been operational in CAR since 2014, with the main goals of providing humanitarian assistance and building the resilience of communities affected by ongoing conflict.

Marie Mbendu (40) with 15-month-old twins Dorcas, in her arms, and Moise, on her back. Photo: Chris de Bode.
Sunrise on the main street in Kouango, Central African Republic. Photo: Kieran McConville / Concern Worldwide.

In Sudan, as with the DRC and other countries on this list, we can see one of the complications that has grown out of the global refugee crisis: While Sudan is the fourth largest country of asylum for refugees (including the largest population of refugees from South Sudan),  it’s also a country that’s producing an increasing number of refugees — nearly 735,000 as of the summer of 2020. Many Sudanese are fleeing protracted violence or climate change-induced drought and famine. Nearly 270,000 have taken refuge in South Sudan (the site of ongoing conflict and food insecurity).

Sudan is the fourth largest host country for refugees - but it is also the sixth-largest country producing refugees.

Over 46.5% of Sudan’s population live below the poverty line. Concern has been in the country for more than 34 years. We also work to support the areas of Sudan that function as host communities for the 1.1 million foreign refugees living in the country.

Like the Central African Republic, the Democratic Republic of Congo remains one of the world’s largest “forgotten crises.” Its displacement numbers, which have increased since 2019 moving it from Number 6 to Number 5 on this list, speak to that reality. Over 807,000 Congolese refugees were recorded in the summer of 2020. This does not include over 4.5 million Congolese displaced within their own country due to violence in the Kasai, Tanganyika, Ituri, and Kivu regions. Amid all of this, the DRC is also a large host community for refugees from neighbouring countries, as we’ll see throughout this list.

Concern has been in the DRC for over 25 years, with emergency response among our top priorities. We work in partnership with the UNICEF RRMP (Rapid Response to Population Movement), the country’s largest emergency response program.

A Concern distribution of tarpaulins to displaced families in DRC. Photo: Kieran McConville/Concern Worldwide
20-year-old Prudence still does not know the whereabouts of her friends from the village. Photo: Marie Madden/Concern Worldwide

Like other countries in the Horn of Africa, Somalia has been plagued by droughts and other effects of climate change. Between 2016 and 2018, four successive below-average rainy seasons led to crop failure, livestock deaths, and a loss of assets. A 25-year armed conflict exacerbated the problem. Many Somali refugees have found Ethiopia, Kenya, and even Yemen to be safer alternatives.

One key program that is of use for Somali refugees is Concern’s Somali Cash Consortium. We’ve distributed over $16 million to over 300,000 people in displacement, allowing them the autonomy and dignity of being able to financially prioritize their own needs.

Since August 25, 2017, over 1 million Rohingya refugees have fled ongoing violence in Myanmar. Many of the stateless Rohingya have wound up in what is known as the world’s largest refugee camp in Cox’s Bazar, Bangladesh.

Together with UN agencies, over 130 local, national, and international nonprofits (including Concern) have supported the Government of Bangladesh adjust to this increase in capacity. Safety and security remain serious concerns for the Rohingya living in Cox’s Bazar, especially in the wake of COVID-19 (which reached the camp this summer).

Concern has been in Bangladesh for nearly the entire span of our more than 50-year history. This helped us to launch a quick and agile response to the influx of refugees in Cox's Bazar.

Since December 2013, conflict in the burgeoning nation of South Sudan has driven nearly 4 million people from their homes — with more than half being forced to leave the country entirely. Approximately 2.3 million South Sudanese live in host communities abroad, including areas of Sudan, Uganda, Ethiopia, Kenya, and the DRC.

Concern has been in South Sudan since it gained independence in 2011. There, we work to address the ongoing humanitarian needs and the pressure generated by widespread displacement. In addition to working with the nearly 2 million internally displaced South Sudanese (many of whom live in Protection of Civilian Sites), we also have a presence in many of the host communities for South Sudanese refugees, including Sudan, Ethiopia, Kenya, and the DRC.

Afghanistan continues to be the country of origin for the second-largest refugee population. Roughly 1 in 10 — that is, 2.7 million — refugees are Afghan by birth, and this number has fluctuated steadily over the last four decades. More than 88% of Afghan refugees are hosted in neighboring Pakistan and Iran.

Today, one in 10 refugees comes from Afghanistan.

For those Afghans still living in their home country, almost two-thirds are in areas that are directly affected by conflict. This conflict prompts ongoing internal displacement. The problem is compounded by the limited capacity of communities, government and humanitarian actors to withstand the impact of repeated natural disasters including floods, landslides, earthquakes and drought.

Concern has been in Afghanistan for over 20 years and recently became the UN’s chosen partner for the emergency response to displacement in the northeastern part of the country.

Over 25% of the total global refugee population are part of the global diaspora in the wake of the 10-year Syrian crisis. As of mid-2020, 6.6 million Syrians have sought refuge, primarily in Lebanon, Jordan, Iraq, Egypt, and Turkey (which is currently the largest host community for refugees). In Lebanon, there are no formal camps, which leaves its population of over 1 million Syrians living across 2,000 communities, often overcrowded temporary shelters.

The number of Syrians displaced within their own country matches the number of refugees, with conflicts driving over 6.6 million people from their homes and forcing them to resettle. 2.98 million still remain in hard-to-reach and besieged areas.

Since 2013, Concern has responded to this crisis, both locally in Syria, and with refugee communities in Turkey, Lebanon, and Iraq.

Concern’s response to the world’s displacement crisis is in keeping with the Comprehensive Refugee Response Framework, approved by all 193 Member States of the United Nations in September, 2016

While every emergency situation has its own unique considerations and challenges, the CRRF gives a set of guidelines for approaching the predictable aspects of these crises. This includes:

In 2018 alone, Concern responded to 66 emergencies in 20 countries — many of which included providing support within the CRRF to asylum seekers, refugees, and IDPs. Much of our work also impacts the lives of migrants and their families (often separated by international borders for months at a time). Our emergency response in 2018 reached 11.6 million people, with urgent necessities such as shelter, healthcare, and food as well as longer-term livelihoods trainings that benefit both displaced and host communities.

Do your bit to help refugees

Want to help make a difference to the lives of millions of refugees? Join this year's Step In Their Shoes challenge and raise much-needed funds for those who need it the most. 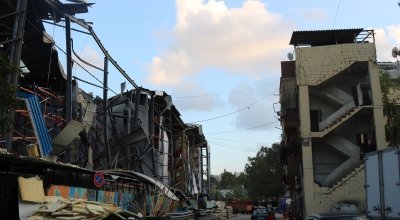 Standing together after a crisis in Beirut

One of the most striking things in the immediate aftermath of the Beirut port explosion, other than just how extreme and widespread the damage was, was the response. 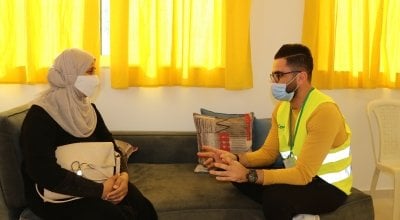 Our team in Lebanon has been providing Psycho-social support to vulnerable women following the Post explosion in Beirut. 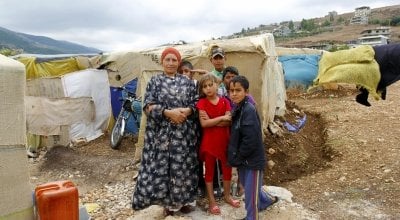 Syria: Human Stories From a Decade of Conflict

This month marks the tenth anniversary of a crisis in Syria. While many Syrians wish to return home, the road to getting there is less certain in 2021 than it was at the beginning of the crisis.