While some progress has been made in the fight for gender equality, gender-based violence (GBV) continues to be a major human rights issue around the world. Regardless of class, ethnicity, age, sexual orientation, disability status, or culture, GBV affects one out of every three women and girls.

Every year, the 16 Days of Activism campaign begins on 25 November and challenges violence against women and girls. Gender equality is one of the most important steps to ending extreme poverty, and ending gender-based violence is a key step towards true equality. Here are some key insights you need to know about gender-based violence, as well as what Concern is doing to protect the most vulnerable.

1. What is gender-based violence?

It’s helpful to define GBV as it can take many forms — including some that aren’t as apparent as others. The United Nations defines gender-based violence as any act of violence against women and girls based on their gender; an act “that results in, or is likely to result in, physical, sexual, or mental harm or suffering to women, including threats of such acts, coercion or arbitrary deprivation of liberty, whether occurring in public or in private life.”

Domestic violence, sexual harassment, rape, forced marriage are all considered forms of GBV when they target women or girls. Female genital mutilation and so-called “honour” crimes are also commonly defined as gendered violence. More subtle forms of GBV also exist, however, and may not be as clear-cut, including online harassment and violence, as well as emotional, verbal, psychological, and economic abuse.

2. Gender-based violence is a widespread phenomenon, not a rare event, affecting over 730 million women

In fact, one in every three women worldwide will be physically, sexually, or otherwise abused in her lifetime. That’s an estimated 736 million women and girls aged 15 and older subjected to intimate partner violence, non-partner sexual violence, or both at least once.

For example, the World Bank has ranked Pakistan as having one of the lowest levels of gender equality in the world. Correspondingly, the UN reports that 70 to 90% of Pakistani women experience some form of physical, emotional, or psychological abuse from a spouse or intimate partner.

“GBV, in general, is a very sensitive topic to discuss in the context of Pakistan as it is considered as an internal issue of family and largely underreported. Women are expected to live with it as they did not think they had an option.”

GBV and gender inequality exist in a vicious cycle in which one enables the other. As such, gender-based violence is a human rights violation that threatens the first article of the UN’s Universal Declaration of Human Rights: “All human beings are born free and equal in dignity and rights.” GBV also threatens other fundamental human rights, including the rights to life, liberty, and the security of person; safety from torture or cruel, inhuman, or degrading treatment; equality before the law; and freedom of movement.

5. Nobody is born violent

While GBV is a human rights violation, it wasn’t originally conceived as such. Gender-based violence is rooted in gender inequality and a series of complex patriarchal beliefs, many of which are specific to cultures, nations, and communities. However, these traditional forms of power and control — both explicit and implicit — continue to create social environments in which violence is both pervasive and normalised.

6. Education — for both women and men — is essential to ending gender-based violence

That said, GBV is a learned behaviour. Because of this, it can be unlearned. Education is key to breaking the cycle of gender-based violence, and engaging men as allies is as critical as working with women. Through Concern’s partnership with Sonke Gender Justice, we are implementing approaches to prevent GBV through Engaging Men on Gender Equality in 10 countries. The approach supports couples in transforming their attitudes and behaviours, with the aim to move towards more positive and equal relationships and reduce gender-based violence in homes and communities.

Most violence against women is perpetrated by their husbands or intimate partners (either former or current). According to UN estimates, 25% of women and girls over the age of 15 have experienced some form of intimate violence. What’s more, women living in poverty are at increased risk of GBV. Around 66% of the women living in informal urban developments of Dhaka, Bangladesh experience physical or sexual violence at the hands of their husbands. To tackle this, Concern engages with men and women in order to influence a change in traditional gender norms and practices. This can result in behaviour change and promotes respectful and non-violent attitudes by men and boys.

This has been one of  the biggest concerns over the last two years as countries move in and out of lockdown: Calls to domestic violence helplines increased as much as fivefold in some countries during the strictest lockdown periods of the pandemic. The UN also reports that, in some countries, the resources used to protect women and girls from GBV were diverted for COVID-19 response.

This isn’t an anomaly. As a result of the conflict in Syria, women and children face increased risks of multiple forms of GBV, including forced and early marriage, domestic violence, and sexual violence. In Lebanon, the national average for child marriage among girls 15-19 is 28% and is 13% for the 14-17 age group. 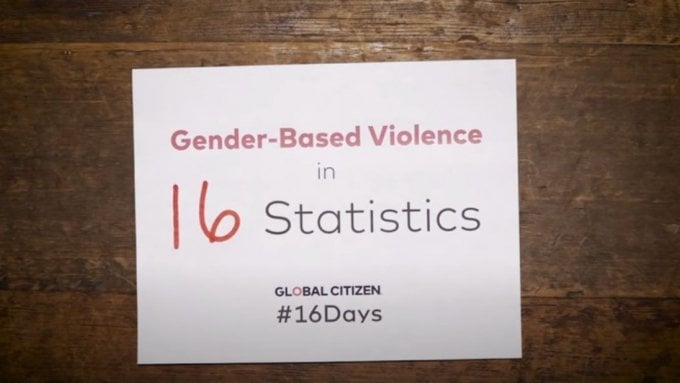 9. GBV is a key driver of the HIV pandemic

Women who have experienced gendered violence are 50% more likely to be living with HIV and, in sub-Saharan Africa, 80% of all new HIV infections in 10 to 19-year-olds are among girls.

11. In some countries, simply going to school can put girls at risk of GBV

While education is essential to ending gender-based violence, it can also be used as a justification for abusers. In the first six months of 2019 alone, 2,264 sexual violence cases were recorded across five education centres in Sierra Leone. Of these, 1,185 cases were aged between 11 and 15 — and 332 became pregnant as a consequence.

Too often, girls experience GBV in and around schools, including forms of sexual harassment and coercion. Only a fraction of these SRGBV (school-related gender-based violence) cases are reported. Concern has developed a Safe Learning Model in Sierra Leone, which includes training teachers on prevention and response to school-related GBV and facilitating community conversations in order to challenge the pervasive system of discrimination and violence.

I want Concern to continue with my school, because I feel safe for my school now. When I am in school, I feel happy and good. I have a good teacher. I don’t like…having a boyfriend or to have a teacher as a boyfriend.

A 2018 study from UNFPA reveals that girls and young women with disabilities face up to 10 times more gender-based violence than those without disabilities. Those with intellectual disabilities are particularly vulnerable to sexual violence.

13. GBV should be a priority in all emergency response

Gendered violence is often treated as a secondary concern in humanitarian action, but it can save lives, especially as rates of GBV are often higher in the wake of an emergency (especially one that forces women to relocate either for a short or long term).

14. Not every woman is in a position to leave an abusive situation

No one deserves to be abused. However, abusers use tactics that make it very difficult for women to escape domestic violence. In many cases, women who do try to leave an abusive partner in order to ensure their own safety as well as that of their children face an increased risk of ongoing and even escalating violence. Women are also prevented from leaving violent relationships because of shame and guilt, lack of safe housing, or the stigma of divorce — which, for women living below the poverty line, will leave them in an even more economically precarious situation.

Many countries still hold beliefs and laws built around the myth that forced sex within a marrage is acceptable. But rape is defined by an action, not just the identity of the perpetrator or survivor.  In Malawi, the most prevalent form of sexual violence is marital rape. In response, Concern has established a programme called Umodzi, meaning ‘united’. Umodzi engages couples to reflect upon issues such as gender norms, power relations, and healthy relationships in order to reduce intimate partner violence and foster gender equity.

16. Targets of gendered violence are not weak or helpless

People who experience gender-based violence are often depicted as fragile and distraught. In fact, this expectation of helplessness is harmful to survivors. People who endure violence react in an endless variety of ways. Some are angry, others distressed. Some have no obvious external reaction. Concern considers those who endure gender-based violence to be survivors rather than victims, capable of not just recovery but also action and leadership.

What is the ‘16 Days of Activism Against Gender Based Violence’?

Find out how Concern’s campaign to end Gender Based Violence is already having a positive impact, working with women’s self-help groups and involving men and boys.
Story
30 November 2021

What is the ‘16 Days of Activism Against Gender Based Violence’?

Find out how Concern’s campaign to end Gender Based Violence is already having a positive impact, working with women’s self-help groups and involving men and boys.
Story
30 November 2021